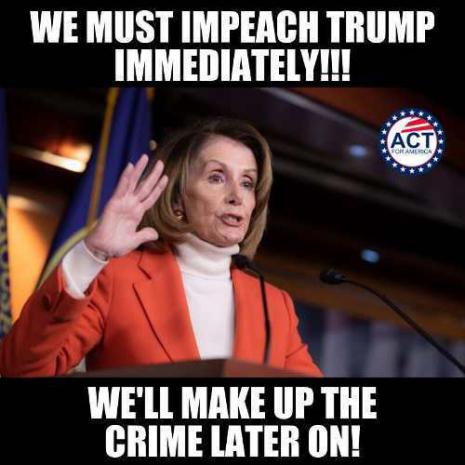 Led by the NYT in print and CNN electronically, anti-Trump media were complicit with undemocratic Dems, operating as virtual party agents for the impeachment scam.

All along it's been largely because Trump won an election he was supposed to lose. Dems, hostile media, and intelligence community elements against him never forgot or forgave.

Impeachment by House majority Dems Wednesday accomplished nothing toward removing him from office — the GOP controlled Senate sure to reject charges and acquit him.

For now, the anti-Trump NYT is in full cheerleading mode, following Wednesday's House vote to impeach, even though it was along party lines — not a single House Republican supporting it.

The Times was wrong calling Wednesday "a day of constitutional consequence." It was wrong claiming "impeachment…put(s) an indelible stain on Mr. Trump's presidency."

The broadsheet ignored his six-point higher approval rating now than when the impeachment inquiry began, or that the latest polls a small majority of voters against impeachment.

It ignored that Dems impeached him for unjustifiable reasons, ignoring his real wrongdoing.

Throughout the 2016 presidential campaign, after his nomination and election, along with throughout his time in office, everything Dems and supportive media threw at Trump failed to stick — their strategy based on political dirty tricks.

Bemoaning certain acquittal by the GOP-controlled Senate, they claimed "(i)t isn't supposed to be this way," falsely accusing Republican leaders of "reject(ing)" party "standards and positions and instead following Donald Trump all the way down (sic)."

Times editors admitted that virtually every US president from inception was "accused of misconduct of one kind or another" — for political reasons it failed to explain.

They falsely claimed Trump's conduct "clear(ed) the bar for impeachment set by the founders" — not for hollow abuse of power and obstruction of Congress charges that have no legitimate standing.

Times editors concluded saying: "The bottom line is that impeachment in the House is unlikely to protect the country from Mr. Trump's abuse of power (sic), because his fellow party leaders prize their power more than the principles they say they stand for."

"The only way to protect American democracy (sic) is for those who value it to put it to work, and vote these people out."

The deeply corrupted US political process is too debauched to fix, what establishment support, never explaining the nation's money-controlled dirty system.

It's how US one party rule with two extremist right wings works, fantasy democracy, never the real thing, what America's ruling class abhors, tolerating it nowhere, especially not at home.

Other anti-Trump headlines were as follows:

Washington Post: "Trump is impeached by the House, creating an indelible mark on his presidency (sic)"

Los Angeles Times: "Impeaching Trump wasn't a partisan plot (sic). It was a necessary response to his abuse of power (sic)"

USA Today: "Trump impeachment is a monumental victory against blatant corruption and for democracy (sic)"

Time magazine: "Democrats Have Impeached Trump in the House. Now the Battle Will Intensify"

ABC News: "Donald Trump becomes 3rd president in US history to be impeached"

CNN: "President Trump has been  impeached"

"(M)edia high-fives aside, what have they accomplished?"

They impeached him based on hollow charges with no legitimacy, ignoring his real wrongdoing.

True enough as things stand now, but it's a long time from a pyrrhic House victory to November 2020.