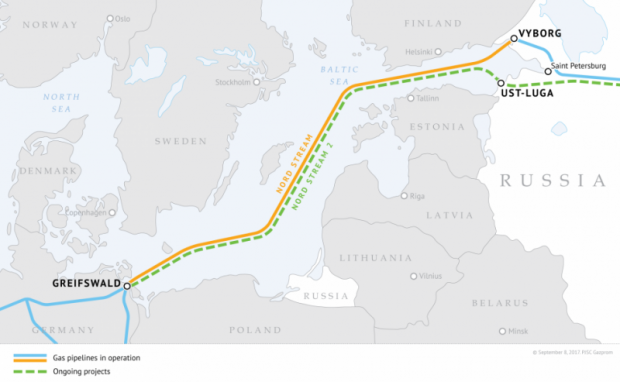 The project is essential for Germany and other European countries to receive plentiful supplies of low-cost Russian natural gas.

Congressional legislation heading for Trump's signature aims to undermine the near-completed project by threatened sanctions on companies involved in its construction.

The US aim is all about facilitating greater sales of 30% higher cost US liquified natural gas (LNG) to European markets at Russia's expense.

"Such actions are a direct violation of international law. They present an ideal example of unfair competition and spread their artificial dominance in European markets, imposing more expensive and uncompetitive products on European consumers - more expensive natural gas."

"Neither Moscow, nor the European capitals, Berlin or Paris like such actions." When completed, Nord Stream 2 will supply European countries with 55 billion cubic meters of gas annually.

"We oppose extraterritorial sanctions, and it did not start yesterday because we faced a similar issue in relation to Iran," adding:

"I don't see any other option but to hold decisive talks (with the US) and point out that we don't accept extraterritorial sanctions."

"We haven't backed down (to the US)…nor do we intend to back down." Nord Stream 2 serves Germany's economic interests, she stressed.

German Foreign Minister said "European energy policy is decided in Europe, not the United States. We reject any outside interventions and extraterritorial sanctions."

When Sergey Lavrov met with Pompeo in Washington last week, he said "I assure you that neither Nord Stream 2 nor TurkStream will stop."

"The EU should promptly develop instruments that either prevent or provide compensation for (US) external meddling in Europe's affairs. The federal government should now push for this discussion in Brussels."

"The US instead will try to impose costs on other Russian energy projects, one of the officials added," Bloomberg reported.

Threatened US sanctions "will not have a big effect on" it.

If US sanctions are imposed on European companies involved in the project, will their governments respond in kind against Washington?

Britain, France and Germany failed to fulfill their JCPOA obligations, siding with the Trump regime against Iran, breaching international law at the same time.

Will Europe be more tough-minded by refusing to yield to the US on Nord Stream 2?

Will the EU pursue its own sovereign interests on other issues when they conflict with US aims?

Will its member states declare their independence and cease operating as US colonies?

Don't bet on it any time soon.

Separately this week, the Senate Foreign Relations Committee will likely approve the so-called Defending American Security from Kremlin Aggression Act of 2018 (DASKA) that has nothing to do with protecting US security from Russian aggression that doesn't exist — nor any other nonexistent Kremlin actions threatening the US.

The measure has everything to do with greater US malign actions on Russia than already.

It's unclear if it has enough congressional support to pass or be able to override a possible Trump veto if the bill reaches his desk.

If false accusations against Moscow "give (Russophobes in Washington) the right to cause economic damage and deal a blow to the nation's welfare, it's not surprising that Russia could draw up measures, including military and strategic ones, which can result in irreparable losses for the Americans' economy and profits."

Washington's anti-Russia agenda failed. Kremlin diplomatic outreach to the US is a waste of time and effort.