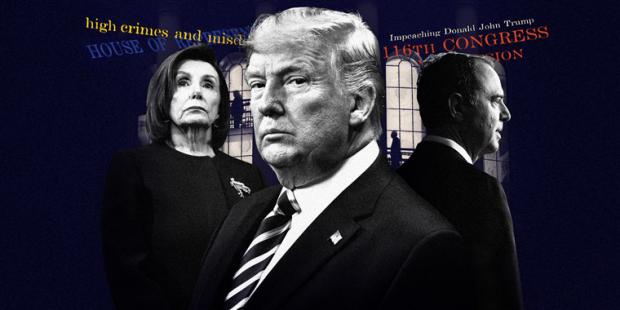 No Republicans supported the scam, choreographed for political reasons, seeking to delegitimize and weaken Trump ahead of November 2020 elections, a scheme more likely to fail than succeed.

"I could not in good conscience vote against impeachment because I believe President Trump is guilty of wrongdoing."

"I could also not in good conscience vote for impeachment because removal of a sitting President must not be the culmination of a partisan process, fueled by tribal animosities that have so gravely divided our countries."

Three other Dem House members did not vote. They represent districts Trump carried in 2016.

Notably, 20 GOP House members not running for re-election next year voted against the sham impeachment. Some broke with Trump and party leaders on other issues.

Article I: Abuse of power, falsely claiming Trump sought foreign interference from Ukraine in the US 2020 presidential election.

Ukrainian President Zelensky debunked the accusation, publicly saying there was no Trump blackmail threat, no quid pro quo, no conspiracy, nothing discussed about withholding US aid for political reasons.

Article II: Obstruction of Congress, falsely claimed he "directed the unprecedented, categorical, and indiscriminate defiance of subpoenas issued by the House of Representatives pursuant to its sole Power of Impeachment," adding:

"(W)ithout lawful cause or excuse, President Trump directed Executive Branch agencies, offices, and officials not to comply with those subpoenas. President Trump thus interposed the powers of the Presidency against the lawful subpoenas of the House…"

Nor did urging current and former regime members not to cooperate with Dems because proceedings lacked legitimacy.

Some did anyway, showing no official presidential order barred their participation.

According to the Wall Street Journal, the impeachment process was unfair, saying:

Dems "refused GOP witness requests in the Intelligence Committee, denied the GOP a hearing day in the Judiciary Committee, and rushed the impeachment debate and vote."

"They claim impeachment is a serious, solemn moment but then sprinted to judgment to meet the political needs of swing-district members who want(ed) (proceedings) over fast."

Ahead of the Wednesday vote, Law Professor Jonathan Turley said: "You could impeach every living president" by the standards Dems used to impeach Trump.

Asked how this will affect future presidents, he said it's "going to have a significant impact (because) this sets the standard quite low for impeachment."

A new Gallop poll released Wednesday, conducted from Dec. 2 - 15, showed Trump's approval rating at 45%, up from 39% when the impeachment inquiry began — one point below his highest 46% number since taking office.

The poll also found that 51% of respondents oppose impeachment, 46% supporting it.

Only 5% of Republican respondents support impeachment compared to 85% of Dems.

Polls by Fox News and CNN show independents evenly divided on the issue.

Everything thrown at Trump for political reasons so far backfired. Even hugely one-sided anti-Trump media reports failed to  weaken and make him vulnerable to removal from office by impeachment.

No legal justification exists to impeach Trump — no "treason, bribery, or other high crimes and misdemeanors" in two articles of impeachment as required under the Constitution's Article II, Section 4.

No evidence proves he colluded improperly or illegally with Ukraine, as Dems falsely claim — wanting him removed from office for illegitimate reasons.

Articles of impeachment against him ignored his high crimes of war and against humanity, along with grievously breaching the public trust — because the vast majority of congressional members share guilt.

"Some legal scholars have suggested she could consider refusing to transmit articles of impeachment to the Senate" because the GOP-controlled body will reject weak charges against Trump.

Pelosi so far said nothing about sending articles of impeachment to the Senate. According to senior Dems, she'll likely delay transmittal at least until early January.

Dems must next adopt a second resolution, naming impeachment managers to send the process to the Senate.

The body's Majority Leader Mitch McConnell sides with Trump, saying he won't "leap into the breach and search desperately for ways to get to 'guilty,' " separately saying: "I'm not an impartial juror. This is a political process."

"The House made a partisan political decision to impeach. I would anticipate we will have a largely partisan outcome in the Senate."

According to two GOP senators, whip John Cornyn and another speaking anonymously, McConnell will move to acquit Trump instead of mobilizing Republicans to dismiss articles of impeachment alone.

A super-majority of 67 votes is needed to convict. No GOP House support for impeachment indicates at least overwhelming Senate opposition by Republican members.

In November 2020, voters will have final say. Both parties, Trump, and his Dem opponent, will try using the impeachment issue to their advantage.

Based on where things stand now, neither side has an advantage.

A slight majority against impeachment and Trump's higher approval rating than when the inquiry began may aid his chance for reelection if he retains this edge.