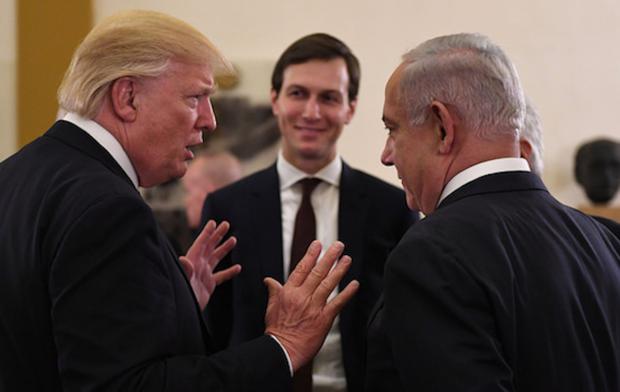 Leaked Information on Trump's No-Peace/Deal of the Century

Information on what may be in Trump's no-peace/peace plan was leaked before — its accuracy unknown unless and until a plan is released.

It hardly matters. It was dead before arrival. Trump's one-sided support for Israel is more extreme than any of his predecessors.

He cut off vitally needed humanitarian aid for Palestinian refugees, suspended other US aid to the PA other than for security to serve as Israel's enforcer, and closed the PLO mission in Washington.

His so-called $50 billion investment fund for Palestinians and neighboring Arab states that's part of his no-peace/peace plan is all about enriching Western and Israeli monied interests, unrelated to aiding long-suffering Palestinians.

He's no friend of ordinary people anywhere, not at home or abroad, especially ones most disadvantaged, waging war on social justice domestically to pay for the great GOP tax cut heist benefitting corporate America and high net-worth households, along with supporting record spending for militarism and endless wars.

On Monday, Lebanon's Al Mayadeen television reported what it called information on what's in Trump's so-called deal of the century.

From what's reported, it establishes the illusion of a "New Palestine" state in parts of the West Bank and Gaza, short of the real thing Israel and the US reject, both areas connected by an elevated highway.

On March 1, 1980, UN Security Council Resolution 465 declared that "all measures taken by Israel to change the physical character, demographic composition, institutional structure or status of the Palestinian and other Arab territories occupied since 1967, including Jerusalem, or any part thereof, have no legal validity and that Israel's policy and practices of settling parts of its population and new immigrants in those territories constitute a flagrant (Fourth Geneva) violation…"

Its actions relating to the city also "constitute a serious obstruction to achieving a comprehensive, just and lasting peace in the Middle East."

On July 4, 2004, the International Court of Justice (ICJ) ruled that "Israeli settlements in the Occupied Territory, including East Jerusalem, are illegal and an obstacle to peace and to economic and social development (and) have been established in breach of international law."

What Security Council resolutions and other international laws established cannot be legally changed by nations for any reasons.

Trump's deal of the century does nothing to alter absolute Israeli control of the Occupied Territories, including Gaza, attacking the Strip at its discretion, maintaining a suffocating medieval blockade for political reasons.

Other reported deal of the century provisions include establishing a Palestinian industrial zone from land bought from Egypt, Palestinians not allowed to live there.

Except for education, Israel would sell electricity, water, and other services to Palestinians, maintaining a chokehold on them like now.

The so-called new state would be prohibited from forming a military force or acquiring heavy weapons, Hamas to be disarmed, clearly what it won't agree to.

A Trump regime statement denied the accuracy of the above information, saying:

"Rumors about the content of (Trump's) peace plan are false. We are confident that the so-called source has not seen the plan."

On Tuesday, Haaretz reported that Congress rejected a Trump regime request for $175 million to support his deal of the century — a so-called "Diplomatic Progress Fund."

Haaretz quoted an unnamed congressional source, saying "(o)ne argument against (the budget request is that) no one thinks (Trump's) peace plan is coming out any time soon, so why devote money to it," adding:

"If it becomes serious, (they'll be congressional) support. No one in Congress will stand in the way of a peace plan if it seems like it has a chance to succeed."

Since 2017, the PA rejected Trump's no-peace/peace plan. On Wednesday, Mahmoud Abbas repeated that "(f)rom day one, we said no to the deal of the century…"

Whatever is in the one-sided deal clearly favors Israel. Palestinian rejection leaves it unclear if it'll ever be released.

An earlier Financial Times report called Trump's plan "a fraud…a smokescreen for the burial of the two-state solution," adding:

It's been delayed so many times PLO secretary general Saeb Erekat called it "the deal of the next century."

"The truth is that it was never really alive or likely ever to arrive," said the FT.

It's a scheme to let Israel officially annex all valued West Bank land and East Jerusalem.