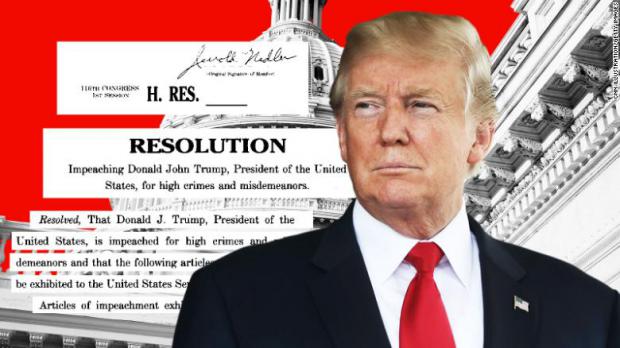 According to Law Professor Jonathan Turley, the case by House Dems against Trump was "the first (US) presidential impeachment to go forward without…a recognized crime."

It's based on "a manufactured and artificial construct. (It) also marks the fastest impeachment of all time."

No abuse of power occurred relating to Trump's dealings with Ukrainian President Zelensky. He refuted the phony accusation. No evidence disputes him.

Nor did urging current and former regime members not to cooperate with Dems because proceedings lacked legitimacy. Some did anyway, showing no official presidential order barred their participation.

Dems failed to make their case. No evidence supports their charges.

Turley: "With half of the country opposing impeachment, the House…approve(d) two articles of impeachment designed to play better on CNN than in the Senate."

"The Johnson case has long been widely regarded as the very prototype of an abusive impeachment. As in the case of Trump, calls to impeach Johnson began almost as soon as he took office."

Quick Senate "acquittal is an affront to the Constitution and a disservice to the nation (sic)," adding:

Dems "fulfilled (their) duty to uphold the constitutional principle of checks and balances (sic)."

Fact: Charges against Trump are phony. No legitimate tribunal would uphold them.

Fact: House impeachment proceedings were and remain all about seeking political advantage.

Fact: Legitimate Trump wrongdoing was ignored because the vast majority of congressional members share guilt — notably his high crimes of war and against humanity, along with flagrantly betraying the public trust.

Fact: No credible evidence backs charges by Dems against Trump. What's gone on and continues is the most disturbing political spectacle since McCarthy witch hunts.

Based on polls showing a small majority of voters against impeachment and Trump's 6-point higher approval rating than when impeachment proceedings began, Dems failed to make their case in the court of public opinion.

Nor did the Times and other anti-Trump media. But don't expect them to quit in the new year.

So Far, The Number Of Americans That Have Died From COVID-19 Is Greater...

CORONAVIRUS-19 What Is Really Going On?

The Pandemic Is, Not a Virus, But the Fear of a Virus

"Just Close The Whole Thing Up":