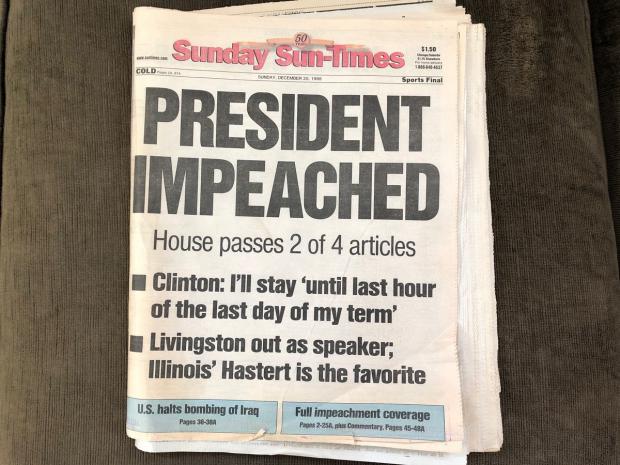 A pox on the establishment fourth estate. Its propaganda machine never rests.

It resembles what Orwell's 1984 novel called the Ministry of Truth — in charge of controlling the message, eliminating conflicting views.

They provide press agent services for wealth, power and privilege, mocking what journalism is supposed to be.

Their misinformation and disinformation is similar to reporting in banana republics and other despotic states, manipulating the public mind for special interests they represent.

Throughout Trump's campaign and time in office, the NYT has been the lead broadsheet against him, vilifying him for defeating media darling Hillary, wanting him tried and convicted on phony charges, calling acquittal "a disservice to the nation."

A separate Times commentary urged undemocratic Dems to "save us (sic), calling them "defenders of democracy (sic)" — what's been absent in the US from inception, a notion the framers rejected. The same goes for today's ruling class.

Saying failure "to hold a credible trial…will damage our constitutional system" ignored the reality of what's going on — Dems hoping their scam will help defeat Trump and gain control over both houses of Congress in November 2020 elections.

The Los Angeles Times falsely claimed "impeaching Trump wasn't a partisan plot (sic)." It wrongfully called it "a necessary response to his abuse of power" — despite no evidence proving the charge.

It blamed Trump for hostile actions by Dems against him, a shameful scam the broadsheet ignored.

CNN, the most distrusted name in so-called television "news," specializing in fake news, has been the leading broadcast medium against Trump all along, making stuff up against him virtually daily.

An opinion piece expressed concern about an impeachment trial "helping Trump politically." A new CNN poll showed 45% of respondents support impeachment and removing him from office — down from 50% in a mid-November survey.

Yet according to the cable channel: "If you are opposed to impeachment in this case, then you are saying that future presidents should be able to abuse the unique power of the office for personal political gain" — because of his dealings with Zelensky. They involved no wrongdoing.

The Wall Street Journal stressed Pelosi's "second thoughts" about whether to submit articles of impeachment to the Senate for trial, calling for one "with or without (Dem) House managers," adding:

She and Senate Minority Leader Schumer aim for "turn(ing) the Senate trial into a second impeachment investigation ad infinitum."

The Journal urged Senate Majority Leader McConnell to counteract damage by House Dems through a public trial whatever they do or don't do.

"(I)mpeachment shenanigans (are) too serious to dismiss," said the broadsheet.

Trump and others on his behalf deserve a chance to present their case Dems denied them, the Journal stressed, adding:

If Pelosi hasn't named impeachment managers by a specified Senate deadline, McConnell "should declare that the (upper house) will appoint managers to make the House impeachment case for the" Dems.

The right to defend one's self against charges is inviolable. Conviction on criminal charges requires proof based on credible evidence beyond a reasonable doubt.

Prosecutors bear the burden, not defendants, what judicial fairness is all about in a court of law or trial by Senate.

"An independent, fair and impartial judiciary," calling it "indispensable to our system of justice, (composed of) men and women of integrity;

Judges…at all times (must ensure) the greatest possible public confidence in their independence, impartiality, integrity, and competence."

"Standards (of) ethical conduct, (including) overarching principles of judicial ethics (and fairness must be) consistent with constitutional requirements, statutes, other court rules, and decisional law, and with due regard for all relevant circumstances."

Findlaw stressed that accused individuals are "innocent until (unless) proved guilty" — calling this standard "one of the hallmarks of the American legal system."

It's more than "an ideal. It's an actual legal presumption." If there's any reasonable doubt, individuals charged with offenses "should be found innocent."

In their articles of impeachment against Trump, Dems presented no credible evidence of abuse of power or obstruction of Congress.

Trial by Senate or a judicial tribunal should dismiss false charges and acquit.