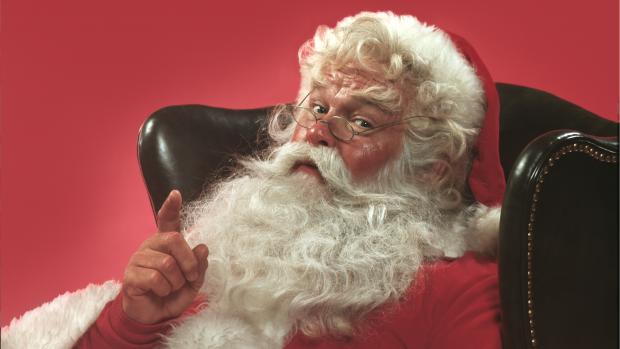 Now our families have "A Christmas Story" played on loop during Christmas Eve and Christmas Day. Just as ubiquitous (as broadcast TV days would allow) was the movie Miracle on 34th Street (Yes,... there really is a Santa Claus) Movie Plot Below at bottom.

It never occurred to me that the story line of 'Santa Claus under attack' would be taken on by... I'm not sure what to call this Santa's critics.

The following News Clip is an interview of Santa by FoxNews' Laura Ingraham.

Ingraham councils Santa on how he should handle the situation but Santa is very apologetic and just wants to be left alone to be Santa for the children. Santa had no idea what he was getting himself into. Ingraham encouraged him to be unapologetic (more like the Santa Claus of The Miracle on 34th Street) but this Santa just wants to get back to the children... like Santa would.

This story impacted me enough to bring it to your attention. What does this story tell us about the future of America and the culture war being waged? By whom and for what ultimate purpose? I'm not sure but I think I'll spend some time asking questions as Donna and I hit the road for a year starting around May.

I see a Fork in America's Road to the Future... I think we'll pick it up and take a close look at it.

Kris Kringle (Edmund Gwenn) is indignant to find that the man (Percy Helton) assigned to play Santa in the annual Macy's Thanksgiving Day Parade is intoxicated. When he complains to event director Doris Walker (Maureen O'Hara), she persuades Kris to take his place. He does so well he is hired to play Santa at Macy's flagship New York City store on 34th Street.

Ignoring instructions to steer parents to buy from Macy's, Kris directs one shopper (Thelma Ritter) to a competitor, Gimbels instead. Impressed, she tells Julian Shellhammer (Philip Tonge), head of the toy department, that she will become a loyal Macy's customer.

Attorney Fred Gailey (John Payne), Doris's neighbor, takes the young divorcée's daughter Susan (Natalie Wood) to see Santa. Doris has raised her to not believe in fairy tales, but Susan is shaken after seeing Kris speak Dutch with a girl who does not know English. Doris asks Kringle to tell Susan that he is not Santa, but he insists that he is.

Worried, Doris decides to fire him. However, Kris has generated so much positive publicity and goodwill for Macy's that Macy (Harry Antrim) promises Doris and Julian bonuses. To alleviate Doris's misgivings, Julian has Granville Sawyer (Porter Hall) administer a "psychological evaluation". Kris passes the examination easily, but a cynical and disdainful Sawyer recommends his dismissal to Doris.

The store expands on the concept of helping customers find the presents they want from competitors. To avoid looking greedy, competitor Gimbels implements the same policy, forcing Macy's and others to escalate. Eventually, Kris does the impossible: he reconciles bitter rivals Macy and Gimbel (Herbert Heyes).

Pierce (James Seay), the doctor at Kris's nursing home, assures Doris that Kris is harmless. Doris is still somewhat worried about someone challenging Kris's claims, and to that end, Pierce recommends Kris take up residence with someone to steer him from any conflicts. At first Julian agrees to put Kris up, but at dinner that night at Fred's place, Fred offers to have Kris stay with him instead. Later that evening, Kris makes a pact with Fred: he will work on Susan's cynicism while Fred does the same with Doris. When Susan reveals to Kris she wants a house for Christmas, Kris reluctantly promises to do his best.

Kris learns that Sawyer has convinced young employee Alfred (Alvin Greenman) that he is unstable simply because he is kind-hearted. Kris immediately confronts Sawyer and finds him unwilling to budge. Enraged, Kris hits Sawyer on the head with Sawyer's umbrella, which was on the desk. Sawyer exaggerates his pain to have Kris confined to Bellevue Hospital. Tricked into cooperating, and believing Doris to be in on the deception, Kris deliberately fails his examination and is recommended for permanent commitment. However, Fred persuades Kris not to give up.

At a hearing before Judge Henry X. Harper (Gene Lockhart), District Attorney Thomas Mara (Jerome Cowan) gets Kris to assert that he is Santa Claus and rests his case. Fred argues that Kris is not insane, because he actually is Santa. Mara requests Harper rule that Santa does not exist. In private, Harper's political adviser, Charlie Halloran (William Frawley), warns him that doing so would be disastrous for his upcoming reelection bid. The judge buys time by hearing evidence.

Doris quarrels with Fred when he quits his job at his law firm to defend Kris. Fred calls Macy as a witness. When Mara asks if he believes Kris to be Santa, Macy starts to equivocate, but when pressed, he remembers the good Kris has done and responds, "I do." Afterward, Macy fires Sawyer. Fred then calls Mara's own young son (Bobby Hyatt), who testifies that his father told him that Santa was real. Mara concedes the point.

Mara then demands that Fred prove that Kris is "the one and only" Santa Claus on the basis of some competent authority. While Fred searches frantically, Susan writes Kris a letter to cheer him up, which Doris also signs. When a New York Post Office mail sorter (Jack Albertson) sees Susan's letter, which is addressed to Kris at the New York courthouse, he suggests delivering the many letters that are taking up space in the dead letter office to "Santa" at the courthouse.

In the final day of Kris's commitment hearing, Fred at first has no evidence that Kris is Santa Claus. Kris is not worried as he has received the letter from Susan and Doris. However, a courthouse official notifies Fred of the delivery from the Post Office. The hearing begins and Fred presents Judge Harper with three of the letters (from 21 full mailbags) addressed simply to "Santa Claus" and delivered to Kris, asserting the Post Office has acknowledged that he is the Santa Claus. Harper insists on seeing all of the letters, which, after some resistance, Fred dumps onto the bench. Harper declares that since the Post Office, a branch of the United States Government, has recognized this man to be Santa Claus, his court will not dispute this conclusion and dismisses the case.

On Christmas morning, Susan is disappointed that Kris could not get her the house she wanted. Kris gives Fred and Doris a route home that avoids traffic. Along the way, Susan sees her dream house with a "For Sale" sign in the front yard. Fred learns that Doris had encouraged Susan to have faith and suggests they get married and purchase the house. He then boasts that he must be a great lawyer since he proved Kris was Santa. However, when they spot a cane inside that looks just like Kris's, he is not so sure.

The End of Freedom is the End of Life - Eric Hofstetter

World Map of % of Single-Parent Homes - USA the Leader

Destruction Of The Family: