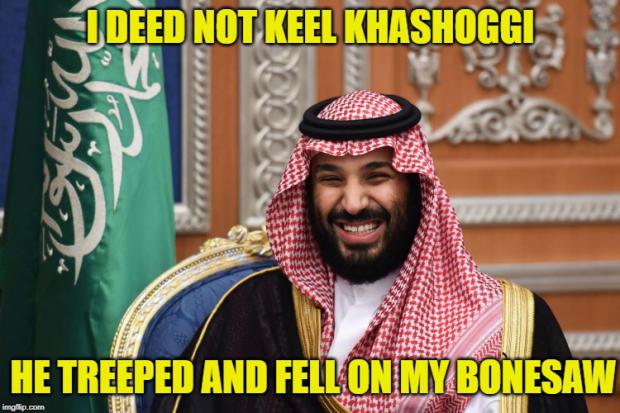 What he says goes on affairs of state, including life and death decisions.

So-called Saudi courts do his bidding. So do others in the kingdom except for his father king Salman – in poor health, why he effectively abdicated authority to his favorite son.

MBS personally ordered Khashoggi murder to silence his criticism of the regime, occurring on October 2, 2018, inside the kingdom's Istanbul consulate — his body dismembered and disposed of, likely dissolved in acid to eliminate remains.

MBS was absolved along with his former close advisor Saud al-Qahtani who was closely linked to the plot.

Saudi tribunals are illegitimate rubber-stamp affairs. What the family dictatorship wants it gets.

Eleven unnamed individuals were tried, eight convicted, three absolved. Khashoggi was granted political asylum in the US, self-exiled from the kingdom because of his views.

She was tasked by the UN's human rights office with establishing "the nature and extent of states and individuals responsible for the murder."

She denounced Khashoggi's "extrajudicial killing for which the kingdom of Saudi Arabia is responsible."

On Monday, Callamard tweeted: "Why the sentence today is anything BUT Justice for #JamalKhashoggi: a) the hearings were held behind closed door even though none of the justification for holding a trial in camera under international law applied to this particular trial."

Last year, the CIA reportedly found evidence of MBS' responsibility for ordering Khashoggi's murder. It's highly unlikely that it happened without his authorization.

According to Mehmet Celik, managing editor of the Turkish Daily Sabah, "(t)he fact that several high-profile people have not been charged raises questions around the credibility of the trial and whether or not (individuals convicted) were chosen as scapegoats," adding:

"There (was clear) evidence that phone calls were held between Qahtani and the people who carried out the murder."

The most high-level culpable figures involved in Khashoggi's murder remain unaccountable for their crime — MBS most of all.

Iranian General Soleimani Was on a Peace Mission with Saudi Arabia...

The USA Doubles Down On Its Saudi Allegiance