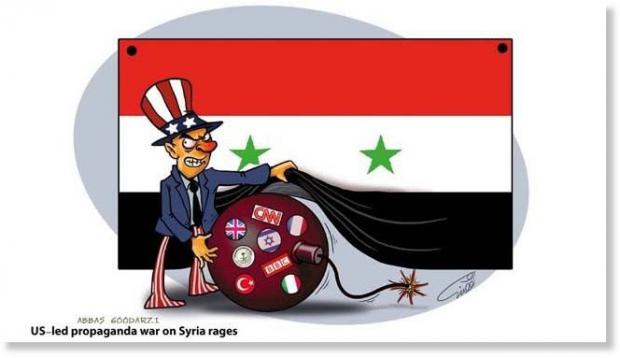 When the US goes to war or plans one, the Times operates as a virtual Pentagon mouthpiece, its reports reading like press releases — supporting aggression instead of denouncing it.

Along with daily propaganda in the run-up to Bush/Cheney's 2003 aggression in Iraq, its disinformation and Big Lies on endless US war in Syria is the most dismal in memory.

It persists in calling jihadists imported from scores of countries "rebels" or "opposition forces," ignoring their use as US imperial foot soldiers — recruited, armed, funded, trained and directed by the Pentagon and CIA.

Instead of supporting the liberating struggle, the Times opposes it, falsely accusing Syrian and Russian forces of "caus(ing) a humanitarian disaster" — what exists as long as US-supported cutthroat killer terrorists control the province.

What the Times called "a multisided war" ignored Obama regime-launched aggression for regime change in March 2011, escalated by Trump, continuing endlessly — Russian and Syrian forces involved in liberating the country from the scourge of US imperial control.

A 2018 ceasefire in Idlib agreed to by Russia and Turkey was breached straightaway by US/Ankara-supported terrorists — unexplained by the Times.

Saying an "all-out offensive would send more Syrian refugees" toward Turkey's border ignores the gravest refugee crisis since WW II because of US aggression — partially alleviated by hundreds of thousands returning to liberated areas.

The Times: "The humanitarian situation is further threatened by Russian and Chinese vetoes last week of a UN Security Council resolution to allow cross-border aid deliveries into Syria from Turkey and Iraq."

Fact: The US, Britain and France blocked a Security Council resolution by Russia and China to deliver vitally needed humanitarian aid through two checkpoints for a six-month period, Damascus directly involved in aiding its own people.

Both countries vetoed a US-supported resolution, authorizing aid through three checkpoints along the Iraq and Turkish borders for the next 12 months — without permission of Damascus.

The Trump regime and its imperial allies want aid going to jihadists, not Syrian civilians in need.

Russia and China want it going to all Syrians in need, what their resolution was all about, what the US blocked — what the Times failed to explain.

Nor did the self-styled newspaper of record say anything about US terror-bombing of Homs province oil fields controlled by Damascus, causing significant damage, wanting the Syrian people denied revenue to provide essential services and for rebuilding the country.

The Times ignored the incident and many others like it earlier. The base hosts about 30 Russian warplanes and helicopters.

According to AMN News, the town is located "near Ma'arat Al-Nu'man…its capture incredibly important for the Syrian Arab Army."

According to Southfront on Tuesday, al-Nusra and allied jihadists are "negotiating a surrender of Maarat al-Numan to the Damascus government and the reopening of the M5 highway," adding: A deal is unlikely.

"(G)overnment forces will likely consolidate their gains in southern Idlib and push to liberate the town of Maarat al-Numan by force."

"This will become an important step in clearing the entire southern Idlib from the terrorist threat" — these elements supported by the Times and other establishment media, making them complicit in US aggression.