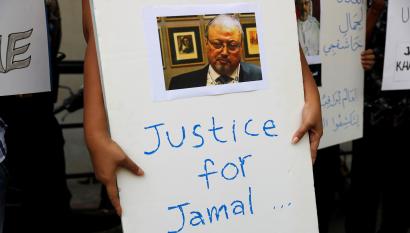 Human and civil rights are banned by the Saudi dictatorship, the Arab world's most ruthless terror state.

Even the State Department admitted its abuses in its 2018 human rights report on the kingdom, saying:

"There were also reports of arbitrary arrest and detention; political prisoners; arbitrary interference with privacy; criminalization of libel, censorship, and site blocking; restrictions on freedoms of peaceful assembly, association, and movement; severe restrictions of religious freedom; citizens' lack of ability and legal means to choose their government through free and fair elections; trafficking in persons; violence and official discrimination against women, although new women's rights initiatives were implemented; criminalization of consensual same-sex sexual activity; and prohibition of trade unions."

"Government agents carried out the killing of journalist Jamal Khashoggi inside the consulate of Saudi Arabia in Istanbul, Turkey, on October 2 (2018)."

"King Salman pledged to hold all individuals involved accountable, regardless of position or rank (sic)."

Khashoggi was a Washington Post columnist at the time of his murder in the kingdom's Istanbul consulate.

Following Monday's ruling, its editors denounced the "shameful travesty of justice…(A)ccording to the CIA, (MBS was) the real author of the crime," adding:

The chief prosecutor's farcical ruling "send(s) the reckless Saudi ruler the message that his murderous adventurism will be tolerated."

On Tuesday, her WaPo opinion piece condemned "the (kingdom's) antithesis of justice," adding:

"This is exactly what impunity looks like, and it must be denounced." Secret proceeding were a "travesty until an actual impartial investigation holds those at the highest level responsible."

Khashoggi's murder "was an extrajudicial execution for which the state of Saudi Arabia is responsible. Yet at no point did the investigation or trial consider the responsibilities of the state."

The so-called trial "constituted obstruction of justice and a violation of the Minnesota Protocol for the investigation of arbitrary killings."

"All of this was then compounded by holding the trial behind closed doors, even though there was no justification for doing so under international law."

Khashoggi's murder was well-planned in advance. The hitman team included a forensic doctor to chop up his body for easy disposal, likely dissolved in acid to leave no remains.

Patsies convicted by sham proceedings had nothing to do with ordering Khashoggi's murder. They were willing executioners, following orders from the top, notably de facto ruler MBS.

Saudi high crimes go way beyond Khashoggi's murder. They include the killing fields of Yemen, involvement in US aggression, and countless homeland political executions, mostly by public beheadings, some by firing squad, most victims wrongfully charged with terrorism — for criticizing kingdom repression.

In January 2016, 47 Saudis were executed on the same day, including prominent Muslim cleric Nimr al-Nimr.

In October 2014, he was sentenced to death on spurious sedition charges, for "seeking foreign meddling in (Saudi affairs), disobeying its rulers, and taking up arms against the security forces," according to Riyadh.

He told supporters that Riyadh "depend(s) on bullets and killings and imprisonments. We must depend on the roar of the word, on the words of justice."

He rejected violence, relied on the "weapon of the word," predicted rebellion if authorities continued their ruthless agenda.

He was declared guilty by accusation before sham trial proceedings began.

Countless thousands of other kingdom victims have been mistreated the same way.

Saudi ruthlessness is well known, regime critics disposed of to silence them. It's how the kingdom operates — tolerating no opposition or dissent.

As long as it's oil rich, it remains a valued US ally, its despotism ignored, Khashoggi's murder a short-term exception to the rule, doing nothing to change close ties to the West.

Iranian General Soleimani Was on a Peace Mission with Saudi Arabia...