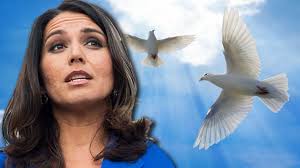 In mid-December, Gabbard  explained why she voted against the FY 2020 war budget — euphemistically called the National Defense Authorization Act (NDAA).

It supports "genocidal war in Yemen, expands (the US) nuclear arsenal…approv(es) (a) new cold war and nuclear arms race, pushing us ever closer to the brink of nuclear catastrophe. I refuse to have any part of this and therefore voted against the bill."

The measure nominally prohibits arms, weapons, munitions, and other support for ISIS and al-Qaeda — a meaningless provision at a time the Pentagon and CIA use jihadists in US war theaters at their discretion, notably in Syria, Iraq, Afghanistan, and Yemen.

Gabbard: The measure permits "backdoor authorization for the use of military force against Iran or Venezuela."

It "increas(es) the threat of nuclear war" by increased funding of these weapons "and prohibits the reduction of deployed intercontinental ballistic missiles and their alert level."

"It undermines…peace" by allowing weapons exports to war theaters, limits US/Russia military cooperation, and fails to step back from the brink on the Korean peninsula.

It authorizes a Space Force as the Pentagon's 6th branch with the intention of waging future wars from outer space.

It fails to provide funding for cleaning up contaminated communities. The Pentagon notoriously is the world's leading pulluter.

Gabbard is outspoken on wanting an end to US wars of aggression, Cold War politics risking greater wars, and a nuclear arms race.

She calls for "bring(ing) US troops home from…Afghanistan, Syria and Iraq," along with ending US military support for the Saudi war machine.

She introduced a resolution to "end presidential wars that are not authorized by Congress."

She should know that Security Council members alone may authorize warmaking. Under the UN Charter, they're only permitted in self-defense if attacked, never preemptively for any reasons.

She surely knows all US wars are illegal against nonbelligerent states threatening no one — reality since WW II ended.

The US is a warrior state at war on humanity worldwide at a time when its only enemies are invented.

On issues of war and peace, Gabbard is on the right side of history. The same goes for her progressive agenda — the only US presidential aspirant worthy of popular support.

Could she end US wars of aggression and bring home US combat troops if elected president?

It's a mute point because things are rigged to assure her candidacy goes nowhere, including by establishment media that demean or ignore her.

If she had a chance to win, she'd likely be impeached and removed from office with overwhelming bipartisan support — or if that failed, dealt with more harshly.

No one in the US is considered presidential material unless willing to support dirty business as usual.

Advocates for peace and social justice are automatically disqualified.