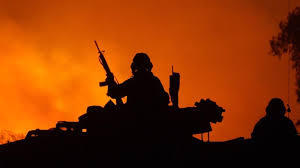 Israel Preparing for War on Iran?

Achieving it depends on transforming independent regional nations into US/Israeli vassal states by war or other hostile means, Iran most of all.

Along with Turkey, it's the only regional country able to challenge Israel militarily if attacked.

Fact: Nonbelligerent Iran threatens no one. Along with the US and NATO, Israel threatens world peace, stability and security.

He ignored Jewish state undeclared war on Palestinians and Syria, time and again terror-bombing Gaza and the Syrian Arab Republic with impunity, the world community ignoring its high crimes of war, against humanity, and slow-motion genocide against long-suffering Palestinians.

Its legitimate program has no military component, repeatedly confirmed by the IAEA, its inspectors banned from illegal Israeli nuclear sites, Iran's legal ones the world's most heavily monitored.

According to Kochavi, Israel is preparing for war on Iran. If launched, it'll be preemptive by the Jewish state, possibly together with the US, not the other way around by a nation that hasn't attacked another one in centuries, what Israel and Washington do repeatedly.

"We will not allow Iran to entrench itself in Syria, or in Iraq," said Kochavi, failing to explain that Tehran works cooperatively with these nations and others, its military advisors alone in Syria, helping Damascus combat US/Israeli supported terrorists.

Kochavi falsely accused Iran of "smuggl(ing) advanced weapons (into Iraq) on a monthly basis, and we can't allow that."

Responding, Iraqi parliamentarian Hassan al-Kaabi called his remarks "incorrect and politically motivated," bent on "creating sedition and finding an excuse to infiltrate into the Iraqi territory."

Along with the US, Israel is likely involved in stoking violence, vandalism and chaos in Iraq.

According to Kochavi: "In the coming war (with Iran, Syria, Lebanon or Gaza), we will have to attack with great force in populated areas and also target the state structure of the entity that allows terrorism to act against us (sic)."

"Israel will target everything that helps in combat operations, such as electricity, fuel, bridges," and other targets at its discretion.

"We will apply disproportionate force at the heart of the enemy's weak spot (civilians) and cause great damage and destruction."

"From our standpoint, these are not civilian villages (towns or cities). They are military bases. This is not a recommendation. This is a plan. And it has been approved."

Retired General Giora Eiland earlier said Israel's war strategy is all about destroying "the national infrastructure (of enemies) and (inflicting) intense suffering among the population."

Senior Israeli officials met "to discuss the possibility of open war with Iran…Israeli troops, especially in the north, have been placed on war footing."

"Israel is girding for the worst and acting on the assumption that fighting could break out at any time."

Zionist ideologue Oren once arrogantly said: "We expect the world to stand with us."

A letter signed by scores of students slammed his "far-right positions" and marginalization of growing numbers of US Jews who disagree with him.

What's coming in the new year may be more war at a time when the world community should prioritize ending ongoing ones.