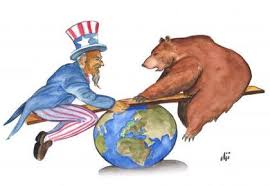 Russia's defense budget is a small fraction of what the US spends for militarism and warmaking.

Yet Russia's super-weapons exceed the best in the West because of efficient and effective use of its resources.

Ahead of the meeting, he "visited an exhibition of advanced Russian weapons and equipment.

He was shown "the mortar (artillery) battery automation facilities set, the Adjutant complex, the Epokha unmanned combat module, the Harpoon-2M portable anti-drone system, a Russian-made buggy, the Phoenix UAV, the Piranha inflatable airboat and the latest Topaz, Taktika and Kalan armored vests," according the Kremlin website.

Addressing Russia's Defense Board, he said the following:

"(M)any quality and system-wide changes took place in the Armed Forces in 2019. The share of modern weapons in the nuclear triad has reached 82%," adding:

"The latest ballistic missiles with the Avangard hypersonic glide vehicle (HGV) are being delivered to the Strategic Missile Forces."

"This weapon of the future can penetrate both the existing and any future missile defense systems."

"The progress is mainly due to the introduction of the most recent technologies in the collection, transmission and processing of information."

"(W)eapons and equipment used in the Aerospace Forces, Navy, and in other branches and services are being systematically replaced by modern ones, including those based on digital technology and artificial intelligence."

"Robotic systems and unmanned aerial vehicles are being rigorously introduced and used in combat training, which dramatically boosts the capabilities of armed units and subunits."

"No country in the world has hypersonic weapons more…capable of reaching across continents" than Russia.

"The degradation of the weapons control system is a cause for a serious concern."

"I'm not only referring to the breaking by the (US) of the Intermediate-Range Nuclear Forces Treaty under totally artificial pretexts that have no grounds whatsoever."

"Washington also created uncertainty as to its participation in the Open Air Treaty."

"Unclear is…the future of Strategic Offensive Reductions Treaty (while the US) strengthen(s) (its) defense capabilities" for offense.

"The US military budget…is comparable to the combined defense effort of the rest of the world."

Putin earlier said Russia will not engage in an arms race. It'll use its resources effectively and efficiently for maximum bang for the buck, my words interpreting his.

He also stressed that, unlike the US and NATO, Russia abides by its treaty obligations.

"How are we able to…remain in the lead," he asked? "By using our brains, by intellect, by a better work organization, by minimizing" waste, fraud and abuse, by focusing on achieving maximum defense capabilities against possible aggression.

"This is not a chess game where…we can be content with a draw." Russian weapons and defense capabilities "must be better" than any other countries.

"We can achieve that," Putin stressed. It's already achieved in many areas of development cost-effectively.

A unique situation exists in the post-WW II era. The US and NATO "are trying to catch up with us," Putin explained.

No other nations possess hypersonic super-weapons, only Russia, some deployed in service, others being developed "according to plan."

• a low-flying stealth nuclear-powered cruise missile with a far greater range than US ones;

• new hypersonic, high-precision missiles able to "hit targets at inter-continental distance and can adjust their altitude and course as they travel," and

In his Tuesday remarks, Putin said development of a ground-launched Zircon hypersonic missile is underway that's virtually invisible to radar at Mach 9 (around 6.3 thousand miles per hour).

Development of other state-of-the-art super-weapons are proceeding according to plan, including technologically superior drones, hypersonic gliders, and other high-tech arms to let Russia meet any future military challenge.

Emphasis is on "advanced high-precision weapons and means of aerospace defense," as well as "the active use of artificial intelligence in the production of military hardware," Putin adding:

"The line of unmanned reconnaissance and attack aircraft, laser and hypersonic systems, weapons based on new physical principles, as well as robotic systems, capable of performing diverse tasks on the battlefield, should be expanded."

Russia needs state-of-the-art weapons for defense because "the world is facing serious challenges and threats" over Washington's withdrawal from the INF and other international treaties, its militarized encroachment near Moscow's borders, its aim to militarize space, and its other hostile actions that threaten world peace.

Among major powers, Russia and China are the leading proponents of world peace, stability, and mutual cooperation among all nations.

The US, NATO and Israel are the mortal enemies of these objectives.