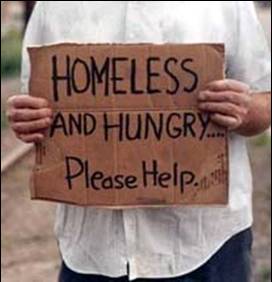 Hunger and Homelessness in the US

Nationwide hunger and homelessness exist in the world's richest country USA because of indifferent policies toward its most disadvantaged.

According to Move for Hunger, one in eight Americans (40 million people) are food insecure.

More than 12 million children don't know when they'll have their next meal. The same goes for over five million seniors, inadequate Social Security benefits not solving the problem.

Over half of individuals aided by Feeding America at times have to choose between food and housing.

For them medical care when needed is unaffordable in a nation where its cost is around double compared to other developed countries.

Tens of millions of Americans struggle to survive because of poverty, unemployment, underemployment, and inability to keep pace with rising costs, annual increases much higher than rigged data.

According to Shadowstats economist John Williams, they're currently rising at around 6% annually, not the phony official 2% number.

Income inequality in the US is greater than at any time over the past century — a significant contributor to poverty, hunger and homelessness.

Notably in the past 40 years, high-net worth households benefitted enormously from rising incomes wealth — while wages for US workers failed to keep up with the rising cost of living.

Housing is increasingly unaffordable. There's no state or county in the US where minimum wage full-time workers can afford a two-bedroom apartment on their own.

According to the National Alliance to End Homelessness (NAEH), over 550,000 Americans endure homelessness on any night of the year.

They include employed and unemployed individuals. Tens of thousands are military veterans.

Poverty, low wages, and unaffordable housing are major factors contributing to the problem.

Around 20% of the homeless population suffers from mental illness, many others from substance abuse, and major physical illnesses. Domestic violence is another contributing factor, affecting young people, single adults, and entire families.

In 2017, nearly seven million households spent over half their income on rent, leaving woefully little for other essentials to life.

Around two-thirds of the homeless are individuals, the other third entire families with children.

According to HAEH, official data on homeless numbers undercount the extent of the problem.

The Housing and Urban Development department (HUD) only began collecting data on homelessness nationwide in 2007.

Populations of New York, California, Hawaii, Oregon and the District of Columbia have the highest percentage of homelessness. Their cost of housing is the nation's highest.

Widespread deprivation exists in the world's richest country because most of its discretionary income goes for militarism, warmaking, corporate handouts, and tax cuts for the rich — at the expense of eroding social justice.

Most US households with one or more working members have little or no savings — leaving them vulnerable to hunger and homelessness if one or more paychecks is missed.

According to Feeding America, seven of ten households they serve face unacceptable choices been paying for food and utilities, food and medical care, and/or food and education.

Nearly half of its client households have fair or poor health. The vast majority of its households are food insecure — without access to sufficient, affordable, nutritious food, at times going hungry.

During the holiday season and throughout the year, tens of millions of Americans are ill-fed, ill-housed, ill-cared for when sick, and ill-served no matter which right wing of the one-party state controls power.