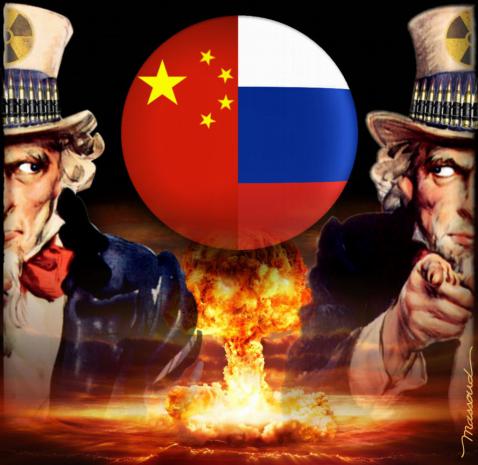 A previous article discussed how the US FY 2020 war budget targets Russia, Turkey and Syria.

Euphemistically called annual National Defense Authorization Acts (NDAAs), they're all about advancing America's imperium, along with enriching corporate America by waging endless wars of aggression on invented enemies and other hostile actions, costing trillions of dollars.

Sales of US stealth F-35 warplanes to Turkey are prohibited over its purchase of Russian S-400 air defense missiles.

The measure also calls on Trump to sanction the country for its action under the so-called Countering America's Adversaries Through Sanctions Act (CAATSA).

Syria is targeted as well, new illegal sanctions imposed on President Bashar al-Assad, members of his government, and individuals supporting it — for heroic efforts to free the country from US-supported terrorists, unlawful occupation of northern and southern areas by Pentagon and Turkish troops, along with wanting Trump regime theft of Syrian oil stopped.

A section of the war budget focuses on China, targeting the country over actions by Hong Kong authorities to end months of orchestrated riots, violence, vandalism, and chaos in the city with US dirty hands all over them.

The so-called Uyghur Human Rights Policy Act passed by the House and Senate this month calls for sanctioning China over alleged mistreatment of these people.

Yet unsubstantiated claims are in the US war budget to punish China over this alleged issue.

The measure also requires the director of national intelligence (DNI) to report regularly on the alleged threats of Chinese hegemony over the global 5G wireless infrastructure buildout, falsely claiming it poses a threat to US national security.

A war budget provision calls for protecting Chinese-Americans from (nonexistent) Beijing pressure or interference in their affairs.

It addresses allegations of Chinese efforts to interfere in Taiwan's 2020 elections, citing no evidence that a threat exists.

It reaffirms restrictions on China's telecom giant Huawei and calls for increasing ties to Taiwan.

It suggests foreign interference in US elections will increase ahead. No evidence indicates meddling by Russia or any other countries in the US electoral process at any time in memory, nothing suggesting a future threat.

The US war budget establishes a so-called Social Media Data and Threat Analysis Center run by the DNI.

Its mission may end up inventing threats and so-called malign behavior, not countering any of the above to US security because no evidence suggests they exist online or in other forms.

In response to the anti-China provision in the US war budget, Beijing's Defense Ministry's spokesperson Wu Qian said the measure violates the One-China Policy and meddles in its internal affairs, adding:

The US "pursues unilateralism and protectionism. This behavior makes it clear to the international community that (its government is) the saboteur of the current international order."

Hostile US policy toward China is all about wanting its economic, industrial, financial, technological, and political advances undermined, its sovereign rights subordinated to US interests.

What's going on risks confrontation with China, Russia, Iran, and other nations the US doesn't control if hardball tactics short of war don't work.

That's why US rage for unchallenged global dominance threatens everyone everywhere.

"I Was Knocking On Hell's Door": 21-Year-Old Student Recounts 'Nightmare' Of C