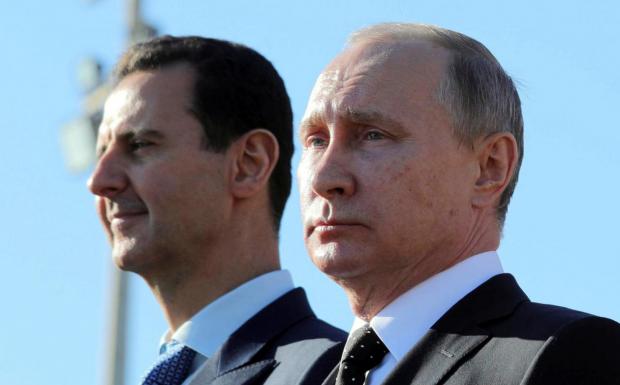 According to the neocon/CIA-connected Washington Post, Bashar al-Assad and Vladimir Putin are to blame for "Syria's latest wave of suffering," saying:

Their offensive "aim(s) (to) driv(e) out civilians, deliberately bombing hospitals, schools and markets."

Fact: Syria is Washington's war, launched by the Obama regime in March 2011, escalated by Trump, no end of it in prospect because bipartisan US hardliners reject restoration of peace and stability in the country and in its other war theaters.

Fact: No so-called "rebels" exist in the country. Anti-government fighters are US-supported cutthroat killer terrorists — trained by the Pentagon and CIA, responsible for CW attacks and other atrocities, falsely blamed on Damascus.

Fact: Idlib is the last major stronghold in Syria that's largely controlled by US-supported terrorists, liberating it essential to free its residents of the scourge they represent.

Fact: Russian and Syrian aerial operations are all about liberating the province, not conquering it.

Fact: Pentagon-led terror-bombing and shelling by US-supported jihadists are responsible for the vast majority of civilian deaths — what WaPo and other establishment media suppress, falsely blaming Damascus and Moscow for high crimes of war and against humanity committed by the US, its imperial allies, and jihadists they support.

Fact: Turkey is part of the problem for illegally invading and occupying Syrian territory, following through on President Erdogan's revanchist ambitions.

Like other establishment media, WaPo is a lying machine, its reports on US war theaters reading like CIA/Pentagon press releases.

The NYT expressed angst over Russian hypersonic weapons, its super-weapons exceeding the best in the West.

The Times falsely accused Moscow of starting an arms race. It spends a small fraction on defense compared to the bloated US war budget — for smashing nations, not defense at a time when Washington's only enemies are invented.

"The Russians are developing capabilities to reach out and attack us," he roared.

In its near-30-year history, the Russian Federation never attacked another country, what US-led NATO does repeatedly.

Russia is a leading force for world peace and stability. The US imperial agenda prioritizes endless wars of aggression — why it's an unparalleled global menace.

Smashing Terrorists in Syria the Only Viable Option