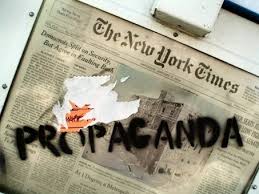 On all things geopolitical and other major issues, the Times features all the news that's unfit print or read, state-approved propaganda, truth-telling suppressed.

Since Iran's 1979 revolution, ending a generation of US-installed tyranny, the Times has been hostile to its sovereign independence, supporting US efforts to return the country to client state status.

It lied claiming the Trump regime "pulled out of (the JCPOA) to thwart Iran's nuclear program," well-known to have no military component, expressing support for illegal US sanctions, amounting to economic terrorism on its people.

The self-styled newspaper of record ignored Iranian anger at the US because of its war on the country by other means, not its ruling authorities as the Times falsely claimed.

It unjustifiably justified Sunday's Pentagon terror-bombing of what it falsely called "Iranian-backed forces in Iraq and Syria," calling them "Iranian proxies."

Ignoring US regional aggression, the Times pretends that Pentagon forces are in Iraq and Syria to combat ISIS — the terrorist group created and supported by Washington, using its fighters as imperial foot soldiers.

"What we did (Sunday) is take a decisive response that makes clear what President Trump has said for months and months and months, which is that we will not stand for the Islamic Republic of Iran to take actions that put American men and women in jeopardy (sic)."

Escalated US aggression in Iraq and Syria may follow.

The presence of US forces in Iraq, Syria, and elsewhere regionally represent its greatest (state) terrorist threat — supported by the Times and other establishment media.

Time and again, Iran is falsely blamed for regional incidents it had nothing to do with. Blaming its ruling authorities for Kata'ib Hezbollah resistance against US occupation of Iraq it wants ended is a bald-faced Big Lie.

The Times turned truth on its head, claiming Tehran "provides broad direction on what kind of attacks the groups make and how often they target American or allied forces" — no evidence presented as proof because none exists.

A separate Times report falsely accused Russia and government forces of bombing hospitals in Syria — a Pentagon, NATO specialty, not how Moscow and Damascus operate, saying:

Over two dozen "hospitals and clinics (were bombed) since April," falsely blaming Russia and Syria for US terror-bombing.

Since it began in mid-2014, Pentagon-led warplanes massacred tens of thousands of Syrian civilians, along with destroying vital infrastructure, including power plants, bridges, hospitals and schools — unreported by the Times and other establishment media, blaming victims for US high crimes.

So-called "proof" the Times claimed to have of hospitals bombed by Russia was invented. No real evidence exists.

Indisputable proof of US high crimes of war and against humanity are unmentioned in its propaganda reports.

Nor do they explain anything about hundreds of monthly shellings by US-supported terrorists on government troops and residential areas, responsible for most fatalities and injuries — Russia and government forces falsely blamed for their high crimes.

The Times and other establishment media operate as mouthpieces for powerful interests — supporting US aggression instead of denouncing it.