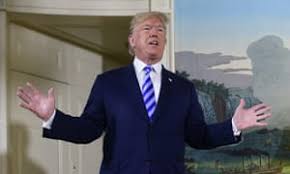 When US politicians comment about the country's adversaries, a an official narrative harangue of disinformation and Big Lies follows so often these figures likely no longer can distinguish between truth and fiction.

Washington's hostility toward Iran has gone on with nary a letup since its 1979 revolution ended a generation of US-installed tyranny, the country regaining its sovereignty, free from vassal state status.

On Monday, White House envoy for regime change in Iran Brian Hook stuck to the fabricated official narrative in discussing Iran at the State Department.

They had nothing to do with "protect(ing) American forces and American citizens in Iraq" or Syria, nothing to do with "deterr(ing) Iranian aggression" that doesn't exist and never did throughout Islamic State history — how the US and its imperial allies operate, not Iran, the region's leading proponent of peace and stability.

That's precisely what they do, including their earlier involvement in combatting US-supported ISIS.

Hook turned truth on its head, accusing Iran of "run(ning) an expansionist foreign policy" — what US aggression is all about, not how Tehran operates.

Like other Trump regime officials, he threatened Iran, a nation able to hit back hard against the US and its regional imperial partners if attacked — why cool-headed Pentagon commanders want no part of war with the country.

Kata'ib Hezbollah, other Iraqi Popular Mobilization Forces, and the vast majority of Iraqi civilians want US occupation of their country ended.

For decades, US direct and proxy aggression, including sanctions war, ravaged the country, killing millions of its people, causing appalling human suffering.

Fact: It's raging in multiple theaters, notably Syria and Yemen, once again in Iraq after last Sunday's US aggression, more of the same virtually certain ahead.

Claiming the US wants regional de-escalation, not escalation, is polar opposite reality on the ground in all its war theaters and in other countries where it conducts subversion against their governments and people.

The best way the US could protect its citizens worldwide is by ending aggressive wars, bringing home its troops, closing its empire of bases used as platforms for hostilities against other nations, and declaring a new era of peace and cooperative relations with other countries.

Based on its belligerent history throughout the 19th and 20th centuries to the present day, this change of policy, if adopted, would be un-American.

Hook: "Iran has been threatening the region…for the last 40 years" — what's true about US aggression, not how Tehran operates anywhere.

Hook: Iran "is facing its worst financial crisis and its worst political crisis in its 40-year history."

Fact: US war on the country by other means, economic terrorism, bears full responsibility for its economic hardships, intended to harm its people, including Trump regime efforts to block exports of food, drugs and medical equipment to Iran.

Fact: Hostile US actions toward Iran and countless other nations are flagrant international law breaches — the world community doing nothing to counter its hot wars and by other means.

Fact: The Iranian "model" prioritizes peace and stability. Endless war on humanity is how the US operates globally — at home and abroad.

Fact: Iran isn't an "outlaw regime," the description applying to the US, its key NATO allies, Israel, the Saudis, and their rogue partners in high crimes.

Hostile US actions are all about offense, unrelated to defense at a time when Washington's only enemies are invented as a pretext for endless wars of aggression.

The US under both right wings of its war party poses an unparalleled threat to everyone everywhere.

As long as its aggression goes unchallenged, the threat of humanity-destroying nuclear war exists.

It could start anywhere — in the Middle East, the Indo-Pacific, or against Russia by accident or design.

On New Year's day 2020, I'd love to be optimistic about what lies ahead.

As long as Republican and Dem hardliners pursue dominance over other nations by brute force and other hostile means, hugely dangerous tinderbox conditions could ignite an uncontrollable firestorm anywhere.