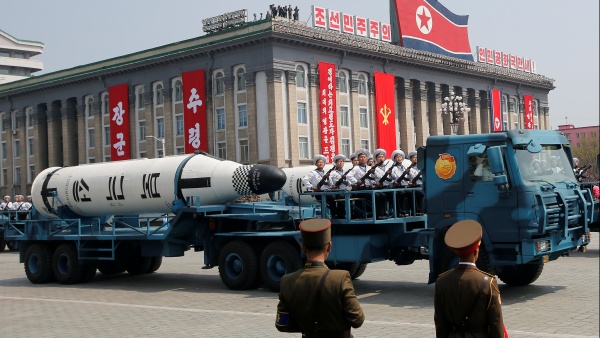 In remarks during Pyongyang's yearend Plenary Meeting, Kim Jong-un said his government will continue development of strategic weapons because of US hostility toward the country, adding he'll no longer be bound by an ICBM test moratorium.

"We can not give up the security of our future just for the visible economic results and happiness and comfort in reality now that hostile acts and nuclear threat against us are increasing and nothing has changed between the days when we maintained the line of simultaneously pushing forward the economic construction and the building of nuclear force and now when we struggle to direct our efforts to the economic construction owing to the US gangster-like acts," adding:

"We will never allow the impudent US to abuse the DPRK-US dialogue for meeting its sordid aim but will shift to a shocking actual action to make it pay for the pains sustained by our people so far and for the development so far restrained."

"In the past two years alone when the DPRK took preemptive and crucial measures of halting its nuclear test and ICBM test-fire and shutting down the nuclear-test ground for building confidence between the DPRK and the US, the US, far from responding to the former with appropriate measures, conducted tens of big and small joint military drills which its president personally promised to stop and threatened the former militarily through the shipment of ultra-modern warfare equipment into south Korea."

"Under such condition(s), there is no ground for us to get unilaterally bound to the commitment (of no further nuclear and missile tests), the commitment to which there is no opposite party, and this is chilling our efforts for worldwide nuclear disarmament and non-proliferation."

"There is no need to hesitate with any expectation of the US lift of sanctions even now that we had a close look into the real intention of the US."

If its hostile policy towards the DPRK continues, there will never be the denuclearization of the Korean peninsula, he stressed.

"We will reliably put on constant alert the powerful nuclear deterrent capable of containing the nuclear threats from the US and guaranteeing our longterm security" — stressing that the DPRK's deterrent actions will depend on US policies toward the country.

Last spring, Kim set a yearend deadline for Trump to engage in good faith evenhanded talks, adding he'd only only agree to another summit if the US agrees to "constructive…improvement of relations…with a proper attitude and (willingness to seek) proper solutions…"

As a new year begins, he's gotten no positive signs from Washington.

Two summits with Trump (in 2018 and 2019) failed because of one-sided White House demands in return for empty promises — sure to be breached based on evidence of how the US operates.

Both right wings of the one-party state demand other nations bend to Washington's will, what the scourge of imperialism is all about — enforced by endless wars of aggression, economic terrorism, and other hostile actions.

Ahead of Kim's yearend deadline,  DPRK Deputy Foreign Minister Ri Thae Song said: "It is entirely up to the US what Christmas gift it will select to get."

In response on Tuesday, Pompeo said the Trump regime is "hopeful that…Chairman Kim will make the right decision and…choose peace and prosperity over conflict and war."

Pompeo, other US officials, and establishment media ignore that neither Kim, his father or grandfather ever attacked another nation preemptively throughout North Korean history.

The DPRK supports peace and stability in East Asia and elsewhere, its nonbelligerent policy polar opposite how the US operates globally — perpetually at war with invented enemies.

When the Korean peninsula was divided post-WW II, a tragic error, the US created the myth of a DPRK threat as a pretext for preemptively attacking the country.

Today, its nuclear and missile deterrents are solely for self-defense because of the genuine threat of US aggression.

US Indo-Pacific imperial policies are all about containing and co-opting North Korea and China — maintaining adversarial relations instead of cooperative ones.

It's how the US operates globally, using sticks, not carrots, in pursuit of its aims.

Establishment media claims of a DPRK Christmas "gift" to the US it would consider provocative proved empty.

The year ended quietly on the Korean peninsula.

Based on DPRK history, whatever Kim intends ahead militarily, it'll surely only be efforts to prepare the nation's defense capabilities against possible hostile US actions — none initiated by North Korea.

Earlier he said his country might seek a "new path" if the Trump regime continues making unacceptable demands with no reciprocal concessions.

He also said they'll "never be denuclearization on the Korean peninsula" as long as hostile US policies continue.

His government "will steadily develop necessary and prerequisite strategic weapons for the security of the state until the US rolls back its hostile policy towards the DPRK and lasting and durable peacekeeping mechanism is built."

What hasn't existed between both countries since the 1940s is highly unlikely ahead with hardliners in charge of US foreign policy.