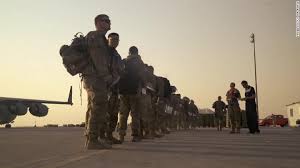 More US Fuel on the Middle East Fire: New Troop Deployment to the Region

Trump began 2020 with a bang by authorizing more US combat troops to the Middle East.

It's already ablaze from endless US wars of aggression on nonbelligerent states threatening no one.

The new deployment is an ominous new year's beginning, perhaps escalating US regional forever wars ahead, including the likelihood of more Pentagon terror-bombing strikes in Iraq.

What Trump OK'd ignored Iraqi furor over last Sunday attacks on Kata'ib Hezbollah paramilitaries, connected to the country's Popular Mobilization Forces that are part of Iraq's military, killing 27, wounding many others.

On Tuesday, a Kata'ib Hezbollah statement said "(t)he next step will consist of passing a law to expel the occupying forces and their followers from Iraq," adding:

"We stress the necessity for the parliament to vote on the departure of US forces that are embroiled in spilling the blood of Iraqis."

Other parliamentarians and cleric Moqtada al-Sadr urge the same thing, wanting hostile US occupation of the country ended.

According to former US regional diplomat Robert Ford, "the ball has moved in a direction down the field in a way not helpful to a sustained American presence in Iraq."

"I don't see any member of parliament, particularly in the Shiite bloc, that would stand and vote against" legislation ordering it.

Thousands of US troops occupy the country, along with thousands more so-called private military contractors, consisting of paramilitary hired gun mercenaries and civilians working for US corporations — exploiting Iraq and its people for profit.

With Trump's authorization, "I (ordered) the deployment of an infantry battalion from the Immediate Response Force (IRF) of the @82ndABNDiv to the @CENTCOM area of operations in response to recent events in Iraq."

"Approximately 750 #Soldiers will deploy to the region immediately & additional forces from the IRF are prepared to deploy over the next several days."

"This deployment is an appropriate and precautionary action (sic) taken in response to increased threat levels against US personnel and facilities, such as we witnessed in Baghdad today."

"The (Trump regime) will protect our people and interests anywhere they are found around the world (sic)."

The Hill and other US media reported that around 4,000 US troops are on standby for possible deployment to the Middle East.

"The entire brigade ha(s) a 96-hour alert window to deploy" its paratroopers.

What's going on is polar opposite how US regional personnel can best be protected.

Their security depends on ending US regional wars, closing US Middle East bases, bringing Pentagon troops home, and declaring a new era of peace and stability over endless US wars of aggression.

Post-9/11 alone, they devastated countries attacked, massacred millions of their people, enraged their survivors, and created a generation of US-haters in nations victimized by its aggression.

Instead of prioritizing peace and stability to the war-torn region and elsewhere, Trump and hardliners infesting his regime appear hellbent for greater regional war.

On New Year's eve, he falsely accused Iran of "orchestrating an attack on the US embassy in Iraq (sic)," adding:

"They will be held fully responsible…They will pay a very BIG PRICE! This is not a warning, it is a threat." Does he have more US regional aggression in mind?

Iran had nothing to do with enraged Iraqis who broke into the US Baghdad embassy compound Tuesday, chanting: "Death to America" — in response to Sunday's Pentagon terror-bombing strikes, an act of aggression against the sovereign state.

"(T)his is your time (sic)," claiming it's for their "freedom (sic)" — denied them by endless US war, genocidal sanctions, occupation, installation of puppet rule, and exploitation.

"We are facing a kind of American obscenity and repetitive miscalculation."

The "impudence of (US) authorities is at such a level that after slaughtering at least 25 people, wounding many Iraqi people, inflicting financial damages on Iraq and violating the country's national sovereignty and territorial integrity, they (Americans) are now blaming the Islamic Republic of Iran for the protests from the Iraqi people against their own ferocious measures in a blatant and cheap act of pinning the blame on others," adding:

"On the one hand, the Americans have ignored the Iraqi nation's liberality and pursuit of independence, and on the other hand, they have forgotten their role in supporting Saddam and in creating daesh (ISIS) and the consequent massacre and depredation of the Iraqi people, and have apparently failed to remember that they are still deemed by the people of Iraq to be 'occupiers.' "

Iran's UN envoy Majid Takht-Ravanchi said Trump regime "anti-Iranian accusations are made to divert attention from the recent brutal (Sunday) killings, and also from 17 years of occupying Iraq which has resulted in" mass slaughter of its people and vast destruction.

He stressed that Kata'ib Hezbollah and other Popular Mobilization Units "are purely Iraqi groups…under the control of (its) government," not Iranian proxies, adding:

They "played an important role in fighting against and defeating ISIL terrorists and now (are the) most important guarantee against revitalization of this (US-supported) terrorist group."

Deploying more US combat troops to Iraq increases chances for greater conflict instead stepping back from the brink for peace and stability in this war-torn part of the world.