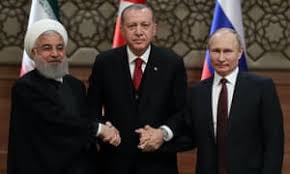 Russian and US geopolitical policies are world's apart.

The US wages endless wars of aggression, raping and destroying one country after another, seeking global dominance by brute force.

In discussions with apartheid Israel, the Saudi and UAE dictatorships last week, Pompeo reportedly threatened more attacks on Iraq, along with further hostile actions against Iran.

Reportedly he vowed to continue US regional aggression, pretending it's democracy-building — a notion the US abhors, tolerating it nowhere, especially not at home.

According to commander of Iranian naval forces Admiral Hossein Khanzadi, "the Americans and their allies held an emergency meeting aimed at disrupting" four days of military exercises conducted by Iranian, Russian, and Chinese naval forces in the Gulf of Oman and Indian Ocean — intended to protect the region's waterways from hostile attacks.

The plot was foiled, Khanzadi explained, Russia, China, and Iran united for regional peace and stability — what the US and its rogue allies oppose.

"(T)he era of American free action in the region is over," said Khanzadi. "They must leave the region gradually," adding:

"We are seeking to achieve collective security, and for that purpose, we are inviting regional countries to join" in future drills.

"There is no threat facing the Persian Gulf region except for the presence of foreign forces such as the US, which are endangering the security of this region."

"Any vessel or aircraft that enters the zone of maneuvers will be hit."

The exercises showed continued solidarity and mutual cooperation among these countries, their relationship strong and growing, a counterforce to US rage for unchallenged regional dominance by endless wars and other hostile actions.

"We are vigorously developing our trade and economic cooperation. The scope of interaction is growing, despite the illegitimate unilateral sanctions and the wider US-led anti-Iran campaign," said Lavrov, adding:

"We can clearly see the goal Washington is pursuing. It is trying to intimidate and blackmail other countries into abandoning their mutually beneficial cooperation with Iran."

"We have a shared position that this policy is contrary to international law and the principles of free trade, and is a blatant manifestation of dishonest and unfair competition."

Russian/Iranian trade is increasing, up 25% during the January-September 2019 period.

"(T)ies between Russian regions and Iranian provinces are also expanding. We agreed to continue to use the significant potential of interregional exchanges as much as possible," Lavrov explained.

Both countries share concerns about nations that consistently and repeatedly breach the UN Charter and other international law — clearly referring to the US and its imperial allies.

Russia continues working to save the JCPOA nuclear deal "that the (US) is trying to undermine in pursuing (its) destructive" agenda.

The landmark agreement "is in danger of collapse" because of its hostility to peace and the rule of law.

What Lavrov called EU "inconsistencies (by) not entirely fulfilling their obligations under the JCPOA" was diplomatic language for the bloc's alliance with the Trump regime to undermine it.

Lavrov: "(I)f this policy of sabotaging UN Security Council decisions, which Washington is imposing on all countries without exception, continues, it could lead to serious negative consequences for the entire region and for international relations."

They're already in tatters because of US global war on humanity, worsening under each new US regime since the 1990s, worst of all under Trump.

Lavrov concluded saying: "Overall, we are very pleased with the outcome of the talks. My friend and colleague Mohammad Javad Zarif invited me to visit Tehran next year, and I accepted the invitation with pleasure."

Asked what both countries will try doing to save the JCPOA, Lavrov stressed the key problem — "US actions (that) run counter fo all conceivable standards of international law."

It's humanity's greatest threat, a rogue nation smashing others to control them, operating by its own rules, contemptuous of peace, equity, justice, the rule of law, and cooperative relations with other countries for their mutual benefit.

Throughout most of the post-WW II period, the US has been perpetually at war against one country after another.

There's no end of its rage to dominate planet earth, its resources and populations — everyone everywhere threatened by its hostile agenda.