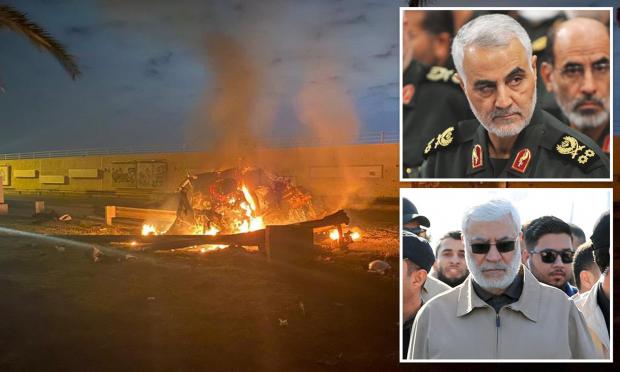 He was "martyred by…US helicopters after lifetime efforts."

"The deputy head of (Iraq's PMU) Hashed, Abu Mahdi al-Muhandis, and head of (Iran's) Quds Force, (General) Qasem Soleimani, were killed in a US strike that targeted their car on the Baghdad International Airport road," adding:

"The American and Israeli enemy is responsible for killing the mujahideen Abu Mahdi al-Muhandis and Qassem Soleimani."

The PMU called what happened a "cowardly US bombing."

Following the assassinations, unnamed Trump regime officials said the strikes were carried out against targets linked to Iran in Baghdad, no further elaboration given.

An AFP report said eight people were killed by the terror-bombing incident.

A US war department statement said:

"At the direction of the president (Trump), the US military has taken decisive defensive action to protect US personnel abroad (sic) by killing Qasem Soleimani, the head of the Islamic Revolutionary Guard Corps-Quds Force, a US-designated Foreign Terrorist Organization (sic)," adding:

"The United States will continue to take all necessary action to protect our people and our interests wherever they are around the world (sic)."

The war department statement falsely blamed Soleimani for high crimes in the region — committed by the US and its imperial partners, not the Islamic Republic of Iran.

He's "an international figure of the resistance, and all the devotees of resistance are now his avengers," adding:

"All the friends and foes must know that the path of jihad of the resistance will continue with double motivation, and a definite victory awaits those who fight in this auspicious path."

"The demise of our selfless and dear general is bitter, but the continued fight and achievement of the final victory will make life bitterer for the murderers and criminals."

Iranian President Hassan Rouhani said his assassination "doubled the determination of the great nation of Iran and other free nations to stand against and resist the excessive demands of the US and to defend the Islamic values," adding:

"There is no doubt that this cowardly and evil move is another sign of US desperation, inability and failure in the region, and the hatred felt by the regional nations toward this criminal regime."

"The great nation of Iran and other free nations of the region will take revenge for this heinous crime against the criminal US."

Iranian Foreign Minister Zarif denounced US "rogue adventurism." The Trump regime "bears responsibility for all consequences of its" actions, he stressed.

Iran is highly unlikely to be drawn into a regional war for what happened.

Most likely, it'll respond in its own way at a time of its choosing that serves its strategic interests.

Retaliation in some form is clearly warranted. It's in Iran's best interest to enlist international support by adhering to high standards and norms against Washington's destructive agenda, Middle East nations and their people suffering most from its imperial rage.

Is Trump foolishly letting hardliners in his regime push him toward greater regional war — on a nation able to hit back hard against the US and its regional allies if attacked?

In response to what happened, Lebanon's Al-Akbar broadsheet headlined: "The martyrdom of Soleimani: It is war"

Respected internationally, he was widely admired by Iranians, his loss a major blow to the nation.

Tehran University Professor Mohammad Marandi said his involvement in combatting (US-supported) ISIS made him a "national hero (and) martyr" domestically and in other regional countries, adding:

"If it wasn't for people like him, this region would have seen black flags flying across the" Middle East."

Soleimani's assassination had nothing to do with deterring Iranian "aggression" that doesn't exist anywhere — everything to do with US undeclared war on Iran and its pursuit of dominance over other nations.

Pompeo reacted to what happened, saying: "Iraqis — Iraqis — dancing in the street for freedom (sic); thankful that General Soleimani is no more (sic)."

Iraqi PM Mahdi said: "The air strike on Baghdad airport is an act of aggression on Iraq and a breach of its sovereignty that will lead to war in Iraq, the region, and the world," adding:

"The strike also violated the conditions of US military presence in Iraq and should be met with legislation that safeguards Iraq's security and sovereignty."

A Hamas statement said Soleimani's assassination "opens the doors of the region to all possibilities, except calm & stability. USA bears the responsibility for that."

US aggression regionally and elsewhere risks opening the gates of hell for greater war than already.