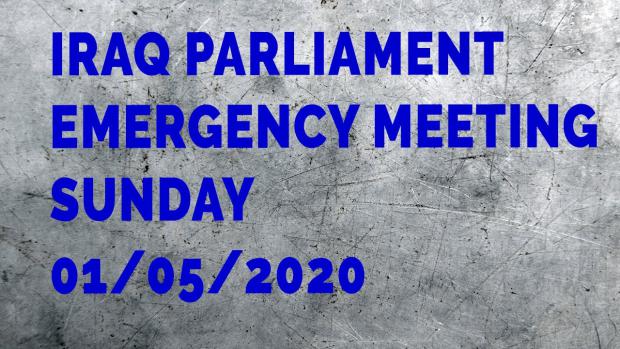 Along with US aggression on a sovereign state threatening no one, killing General Soleimani by the Trump regime aroused tens of millions of Iranians, along with countless others in the region and elsewhere against the US.

It's a gangster state run by its criminal class, humanity's greatest threat by its rage for global dominance.

According to Reuters, Iraqi parliamentarians convened in emergency session on Sunday.

They passed draft legislation requiring the Baghdad government to demand withdrawal of US occupying forces — a hostile presence in the country, undermining its security. More on this below.

The session came after the week-ago Pentagon terror-bombing of sites in Iraq and bordering Syria, killing about 30 Kata'ib Hezbollah fighters connected to Iraq's Popular Mobilization Units, wounding many others.

The incident was followed by the assassinations of IRGC Quds Force commander General Qassem Soleimani and Iraqi deputy PMU leader Abu Mahdi al-Muhandis, their forces connected to the country's military.

These actions flagrantly breached international and US constitutional law.

His remains were flown from Iraq to Ahvaz in Iran's southwest. From there, a cortege headed to Mashhad in the northeast. On Monday, he'll be returned to his hometown of Kerman for burial Tuesday.

Redoubtable alive, Soleimani is larger than life in death by elevation to martyr status.

On Press TV Sunday with an Iranian academic, he explained that Trump's counterproductive action shot imperial USA in the head in the region, not its foot.

Will Soleimani's assassination be a turning point in US regional influence? Will US arrogance be its own undoing?

Will US forces be ordered out of Iraq by Baghdad as its parliamentarians demanded? Will they be unwelcome elsewhere in the region over time?

Soleimani was the architect and driving force behind Iran's war on US-supported regional terrorism, along with the scourge of the US regional presence.

"The whole world has a responsibility to (oppose) US terrorism and the assassination of Lieutenant General Qasem Soleimani, and should act properly to prevent such measures from becoming institutionalized," adding:

"(E)verybody should know that if they do not take necessary measures, (the US) will repeat such arrogant and criminal acts."

On Saturday, IRGC Commander Major General Hossein Salami said "the assassination of martyred General Qassem Soleimani will be followed by a strategic revenge which will definitely put an end to the US presence in the region."

Wherever US forces show up, mass slaughter, vast destruction, and human misery follow.

Iran and other regional countries won't be free from its menace until they're gone.

On Sunday, Press TV reported that a majority of Iraqi MPs passed legislation, "demanding the withdrawal of US military forces from the country in the wake of" US aggression against the country's territory, adding:

"(T)he central government in Baghdad is obliged to" expel US forces, occupying Iraq on the phony pretext of combatting the scourge of ISIS the US created and supports.

The legislation also calls for Iraq's foreign minister to call for Security Council denunciation of US crimes on its territory.

"On Saturday, the leader of a powerful political coalition in Iraq's parliament said US forces will be driven out of the Iraqi territory following the vicious, cowardly US operation," Press TV reported.