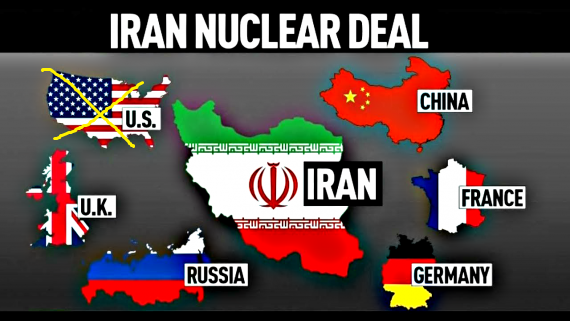 It took years of negotiations to conclude the landmark JCPOA nuclear deal in 2015 between Iran and P5+1 countries (Russia, China, UK, France and Germany + the EU).

In May 2018, the Trump regime unlawfully pullout out, a mortal blow to the deal based on what followed.

Britain, France, Germany and Brussels breached the JCPOA by failing to fulfill their mandated obligations, effectively killing it by siding with hostile US policies toward Iran.

In response, Tehran incrementally rolled back its voluntary commitments as permitted under Articles 26 and 36 — on Sunday taking a 5th and final step, a statement saying:

"The Islamic Republic of Iran, in the fifth step in reducing its commitments, discards the last key component of its operational limitations in the JCPOA, which is the limit on the number of centrifuges," the level of uranium enrichment, the stockpile of nuclear fuel, as well as nuclear research and development.

Henceforth, Tehran's legitimate nuclear program will be developed according to its internal needs.

Cooperation with IAEA monitors will continue unhindered as before.

If unlawful US sanctions are lifted and Europe comes into compliance with its mandated obligations, Iran will again adhere to its voluntary commitments under the deal.

"As 5th & final REMEDIAL step under paragraph 36 of JCPOA, there will no longer be any restriction on number of centrifuges."

"This step is within JCPOA & all 5 steps are reversible upon EFFECTIVE implementation of reciprocal obligations."

Trump's assassination of Iranian Quds Force commander General Qassem Soleimani, along with failure by Europe and the UN to condemn what happened, further assured Iran taking its final step.

"The American action was a reaction to a series of military provocations for which Iran is responsible (sic)," adding:

"We also see with great concern Iran's activities in the region (sic). We stand before a dangerous escalation" — against Iran, not by its ruling authorities, she failed to stress.

"The Islamic Republic of Iran regards the German government's stances in support of brutal and unilateral US actions which are against international law as complicity in these actions, and Iran reminds the German government of General Soleimani's key role in fighting the terrorism of Daesh, whose continued existence would have endangered the lives of countless number of people even in Europe."

Britain's Boris Johnson also stands with the Trump regime against Iran. According to the London-based Sun broadsheet:

"If things unravel quickly, the UK will always stand shoulder-to-shoulder with the US," the Sun reported, adding:

Royal navy "hunter-killer…submarines (are) within range of Iran," the broadsheet quoted a UK military source.

Mark Twain long ago noted that history doesn't repeat but it rhymes.

Britain "will not (benefit) from (allying with) Trump's Iranian misadventure."

Trump "lacks the imagination to see the issues involved in the Middle East. The killing of the Iranian general is just another example of the failure of his 'maximum pressure campaign' on Iran."

Allying with Trump against Iran shows neither the US or Britain can be trusted.

After speaking with Trump on Sunday, French President Macron expressed "solidarity" with the US and West while criticizing Middle East "destabilizing activities" — referring to Soleimani's assassination by the Trump regime.

France's Europe minister Amelie de Montchalin expressed concern about "a more dangerous world" in the wake of what happened, calling for "stability and deescalation."

"The whole world should know that that the Americans will be removed from the region soon."

On Sunday, Iraqi PM Mahdi said "specialists from various agencies (in the country) are drafting a document on further legal and procedural actions to implement the parliament's decision to" expel US and other foreign troops from its territory.

Regional tensions are more greatly heightened than any time since the run-up to Bush/Cheney's 2003 aggression on Iraq.

The danger of anything happening ahead by accident or design is ominously real.

Following the Trump regime's assassination of Iranian General Soleimani, will other key IRGC commanders be targeted for elimination by the US?

Will similar actions be taken against Iraq after its parliament passed legislation to expel US and allied forces from the country?

Will the US escalate ongoing Middle East wars? Is another regional one likely?

These are hugely dangerous times because of hostile US actions in the Middle East and elsewhere.