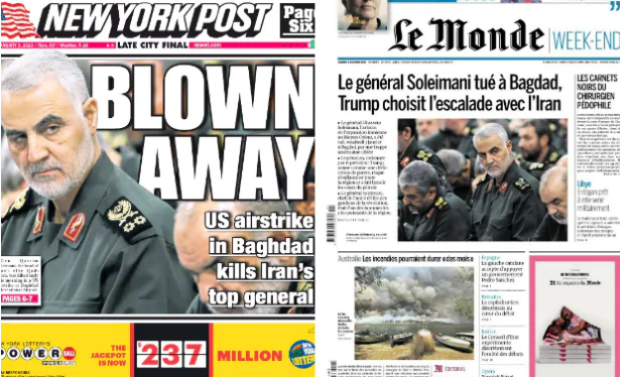 Media React to Iran's Response to US Aggression

Establishment media are militantly hostile to nonbelligerent Iran — because of its sovereign independence, opposition to US imperial wars, support for Palestinian rights, and forthrightness in denouncing US and Israeli high crimes.

At the same time, they're hostile to Trump for winning an election he was supposed to lose, defeating media darling Hillary.

Their reports on Iranian General Soleimani's assassination, authorized by DJT, are mixed, trying to have things both ways, shamefully demonizing Soleimani, a revered national hero elevated to martyr status, while criticizing Trump.

In its latest edition, the NYT boldly headlined: "Iran Fires More Than a Dozen Missiles at US Forces in Iraq…Attack on Two Bases Is Retaliation for Soleimani's Killing, Iran Says," adding:

If further US strikes on Iran are ordered, retaliation is virtually certain, risking possible full-scale war with a nation able to strike US bases anywhere in the region, its aircraft and warships, along with targets in Israel, Saudi Arabia, and other US allied countries.

Things are very much in flux. Anything is possible ahead because of US rage for imperial dominance, notably in the oil-rich Middle East.

Separately, the Times falsely accused Soleimani of having "American blood on his hands" — a bald-faced Big Lie repeated by other establishment media and US officials.

At the same time, the self-styled newspaper of record correctly said "Iranian blood (is) on (US) hands," failing to explain how much and that it began with toppling its widely respected/democratically government in 1953, replacing it with a generation of fascist tyranny.

"In Tehran, (its ruling authorities) announced (they'll) no longer observe controls on its uranium enrichment" — because the US and Europe breached their mandated JCPOA obligations, WaPo failed to explain, further saying:

"Millions of Iranians…took to the streets to mourn Soleimani, providing (Tehran) with a nationalist boost and setting the stage for likely acts of retaliation" — in response to further US aggression if ordered WaPo omitted.

Statements by Iranian officials clearly indicated they want peace, not war, but will retaliate against US aggression.

Indeed Iran, other regional countries, and the Arab street want the US expelled from the region.

A sample of other world headlines were as follows:

AP News: "Iran strikes back at US with missile attack at bases in Iraq"

ABC News: "After Iran missile strikes on US military facilities in Iraq, what happens next?"

CBS News: "All eyes on Trump after Iran fires missiles at US bases in Iraq"

NBC News: "Iran retaliates for attack on general by firing missiles at US forces in Iraq"

Fox News: "Iran sends warning to US amid attack on US base in Iraq"

CNN: "Iran fires ballistic missiles at US forces in Iraq"

Al Jazeera: "World reacts after Iran fires missiles at US targets in Iraq"

The US bears full responsibility for endless wars of aggression — in the Middle East and elsewhere.

Both right wings of its war party share guilt. So do establishment media for supporting what demands denunciation.

Key is what follows the latest developments.

Will the Trump regime escalate things or step back from the brink of possible war with nonbelligerent Iran?

Much depends on what actions it takes ahead.

Given its rage for dominating other nations and their resources by brute force, I'm not optimistic about what's coming — whether or not Trump escalates conflict with Iran.