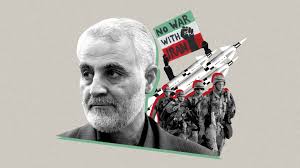 US foreign policy is defined by pressuring, bullying, and bribing other countries to bend to its will.

Actions it takes against nations unwilling to subordinate their sovereign rights to US interests include naked aggression, color revolutions, economic terrorism, targeted assassinations, and other hostile actions.

The US long ago abandoned adherence to international, constitutional, and its own statute laws, operating exclusively ad libitum.

"Since taking office in January 2017, Trump's dramatic positions and pronouncements on the Middle East and beyond have shocked and dismayed much of the US foreign policy establishment."

Trump and Netanyahu "fac(e) charges for misusing their office for personal gain, and have a problematic relationship with the truth."

Trump pursues "the same ultranationalist…agenda (as) Netanyahu in Israel and the Middle East…exploiting foreign policy to deflect attention from their domestic troubles."

"He's more unhinged by the hour. Threatening war crimes and now threatening our Iraqi allies. Telling Congress via Twitter that he can start a war with Iran. This is a very dangerous time. Congress must demand that he comply with the Constitution."

Former US official Brett McGurk said Soleimani's assassination "presume(s) that we are now at war with Iran," adding:

"I don't say that lightly. We can hope for the best, but the presumption is we're at war with Iran."

"This is not a limited strike like…in Syria. This is a big piece of business and it means war."

"(S)hifting (Trump regime) narratives show (that killing Soleimani) was not gamed out, was not well thought through, and for (DJT) to say that we are prepared to strike 52 sites inside Iran with no congressional authorization, including cultural sites which is clearly a violation of international law, stretches the boundaries of our…republic to a real extreme."

"It's almost unprecedented…an extremely serious situation" — a  US president acting aggressively against a foreign nation without consulting Congress, informing lawmakers after the fact.

The US has been at war with the Islamic Republic by other means since its 1979 revolution.

The Trump regime's assassination of General Soleimani, an act of war, turned things hot — to what extent only the fullness of time will tell.

"According to the reports sent by our sources in the region to this moment, at least 80 US (military) personnel have been killed and around 200 others wounded."

"Some 20 sensitive points (on the Ein Al-Assad airbase) were struck by 15 missiles, resulting in the destruction of a considerable number of drones and helicopters."

A total of "104 sensitive US positions in the region have been identified to immediately come under raid as soon as the Americans make the first mistake."

An Iraqi statement said none of its personnel were harmed by Iran's missile strikes.

Following what happened, an IRGC statement said it fired tens of ground-to-ground missiles at bases "occupied by the terrorist and aggressive army of the United States" in response to Soleimani's assassination, adding:

Further US aggression "will face a more painful and crushing response."

"(A)ll the US allied states where the terrorist army has a base, any territory that becomes the origin of any hostile and aggressive action against the Islamic Republic of Iran in any way will be targeted."

"We believe that the Zionist regime by no means stands aside from the criminal US regime in these crimes."

If Trump escalates aggression on Iran, Israel will be a prime retaliatory target.

Trump tweeted the following in response to overnight developments:

"All is well! Missiles launched from Iran at two military bases located in Iraq. Assessment of casualties & damages taking place now. So far, so good!"

On Wednesday, he'll comment further on what happened, according to a White House statement.

A US response in some form seems highly likely, what hardliners surrounding Trump will surely urge. The risk of US war on Iran is real.

Trump no doubt will do what he feels benefits his chance for reelection. War on Iran with large numbers of US casualties would likely make him a one-term president.

On Tuesday, General Soleimani was laid to rest in Kerman, his home city, IRGC spokesman General Ramezan Sharif saying during the burial ceremony:

"The US Ein Al-Assad airbase and a second base in Erbil in Iraq came under attack at 1:20 AM (local time), the same hour that" the US killed Soleimani.

Separately according to Iraq's Arabic-language al-Forat news agency, "(t)he US-led military coalition…reportedly relocated its headquarters in Iraq to Kuwait in the wake of" his assassination.

On Monday, Iraq's al-Nujaba Movement deputy secretary general Nasser al-Shammari said "(w)e have the right to target Americans wherever they may be found," adding:

"The leaders of Iraqi resistance groups will convene a meeting (Wednesday or Thursday) to declare the formation of a united front against the US (military) presence" in the region.

On Tuesday, Al Jazeera reported that Iraqi PM Mahdi "confirmed that he had received what the US said was a draft letter describing steps its military would take to 'move out' of Iraq," adding:

"The Pentagon had said an unsigned draft version of the letter had been mistakenly sent, but the Iraqi premier disputed that claim."

He received "signed and translated copies" on Monday. It discusses "redeploying with an aim to withdraw from the country. The expressions were very clear," he said.

Mahdi's office stressed that Baghdad authorities are doing"everything (they) can to prevent the descent into open war."

The threat of further Trump regime hostilities is real, especially if IRGC claimed US casualties in Iraq is accurate.

According to Press TV, world community reaction to Iran's retaliatory strikes on US bases in Iraq focused largely on calls for deescalation to avoid greater regional war than already.

A China Daily editorial slammed the US for creating a regional "cauldron of tensions."

Japan urged "all related nations to do their utmost diplomatic effort to improve the relations."

EU foreign affairs chief Josep Borrell called on all parties in the region to deescalate tensions, adding: "It is in no one's interest to turn up the spiral of violence even further."

"Mutual strikes by the US and Iran could lead to a full-scale war in the region. If Washington realizes it can't achieve its goal, there's the danger of a nuclear war."

"We need to assess the losses suffered by the Americans after the Iranian missile attack. If the damage is serious, the US can't help but respond" — making a hugely dangerous situation worse.

"The proportional response (to US aggression) is concluded."

Federation Council Senator Alexey Pushkov said if the Trump regime strikes back in response to Iran's overnight missile attacks, "then a missile followed by a major land war is almost inevitable."

"It will not be popular in the US and will most likely cost Trump an election victory. It's better to stop now."

He failed to explain US war strategy since aggression against Libya and Syria in 2011 — using heavily armed jihadist proxy ground forces, supported by Pentagon-led terror-bombing.

If the US wages hot war on Iran, invading the country with Pentagon combat troops is highly unlikely — other than numbers involved in directing jihadist proxy forces if used.

An earlier offer under consideration by Baghdad was declined under heavy US pressure to reject it — perhaps not this time, given recent developments.

"The president has been briefed and is monitoring the situation closely and consulting with his national security team."

Much depends on how Trump and hardliners surrounding him respond to overnight developments.