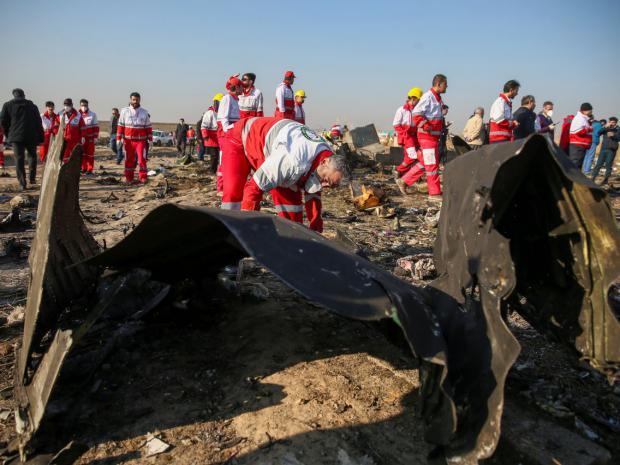 Iran's Transportation Minister Mohammad Eslami said the following in response to what happened:

Iran's "Accidents Commission in Civil Aviation Organization has been tasked with the accurate probe of the crash and will issue the final report to prevent similar incidents in the future."

"The plane's trajectory, which was initially heading westwards from the airport, suggests that it made a U-turn after a technical malfunction emerged."

"The plane was returning to the airport at the time of the crash."

No evidence suggests foul play, an engine fire seen from the ground after takeoff the possible cause of the crash.

Citing unnamed US, EU, and Canadian security sources, Reuters said "the initial assessment of Western intelligence agencies was that the plane had suffered a technical malfunction and had not been brought down by a missile."

"There was evidence (that) one of the jet's engines had overheated."

Some establishment media suggested Iranian responsibility for downing the aircraft.

What possible motive could its authorities or military have to want the commercial airliner destroyed, its passengers killed, most of them Iranian nationals?

None whatever! Clearly what happened was a tragic accident, involving a Boeing 737, the latest incident involving one of the company's airliners, numerous others preceding it.

"The immediate aftermath of the crash brought confusing and contradictory statements from Ukraine and Iran (sic)," adding:

Both issues were unrelated. All Iranian missiles struck their intended targets. They were fired hours before the Ukrainian airliner took off, what the Times didn't explain.

Western sources "are spreading propaganda that the Ukrainian flight was targeted. This is ridiculous," adding:

"Most of the passengers on this flight were our valued young Iranian men and women. Whatever we do, we do it for the protection and defense of our country and our people."

The neocon/CIA-connected Washington Post falsely reported 60 Canadians onboard the Ukrainian airliner. Only 32 foreign nationals were on the flight.

WaPo quoted a US source saying the crash appeared to have "all the earmarks of an intentional act" — no evidence cited suggesting it.

Ukrainian authorities ruled out terrorism, suggesting likely engine failure, what analysis of the crash site and black boxes aboard the doomed aircraft will likely determine.

The Wall Street Journal said "investigators should consider a hostile act." The aircraft was on fire before crashing, according to witnesses on the ground.

Nothing suggests it was struck by a missile in flight. Iranian official Mohammad Eslami debunked "rumors about the incident being a terrorist attack, explosion or shooting at the plane."

Plane crash investigators will cover all possibilities of what happened. Ukrainian experts together with their Iranian counterparts will determine what brought the plane down.

The Journal falsely claimed that "tensions between the US and Iran…complicat(e)" the investigation.

Not so, both issues unrelated. Iran and Ukraine intend learning the cause of the crash — what always follows these incidents to avoid repeats of the same thing.

When commercial airliners crash in Western and most other countries, accusations of terrorism or other foul play rarely follow.

Because the Ukraine airliner crashed in Iran, the usual unreliable sources hostile to country suggest blaming its authorities — despite no evidence suggesting their responsibility for what happened.