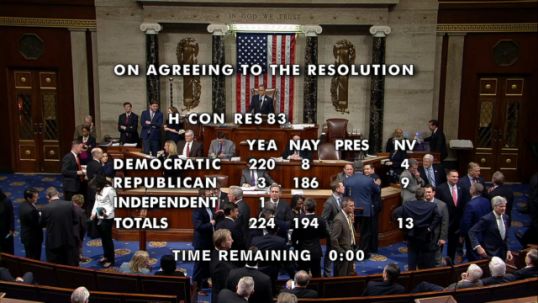 On Thursday, House members adopted a war powers resolution by a 224 - 194 majority to prevent war with Iran without congressional authorization — members voting largely along party lines.

The 1973 War Powers Resolution requires a congressional declaration of war, or a national emergency created by an attack on the US, its territories, possessions, or armed forces, for the executive to deploy troops to engage in foreign hostilities.

It requires the president to notify Congress within 48 hours of committing forces to military action abroad.

It prohibits them from remaining over 60 days, a further 30-day withdrawal period allowed.

The War Powers Resolution ignores UN Charter international law — stating that Security Council members alone may authorize war by one nation on others, permitted only in self-defense if attacked, never preemptively.

Presidents, prime ministers, lawmakers, justices, and/or other officials of nations may not legally take this most serious step on their own — what the US ignored throughout the post-WW II period, waging wars of aggression on one nonbelligerent country after another.

The nonbinding House measure is likely dead-on-arrival in the GOP-controlled Senate.

It's symbolic alone with no power to stop hostile Trump regime actions against Iran, possibly including more assassinations of Iranian officials.

The measure "commends the president for ordering the successful operations to locate and eliminate" Soleimani.

It says the cold-blooded murder of a key anti-terrorism freedom fighter "represents a measure of justice and relief for the families and friends of the hundreds of American men and women who lost their lives in Iraq and Afghanistan (sic)."

It falsely blames Iran for US war crimes in these countries. It shamefully called widely revered and respected Qassem Soleimani a "terrorist."

He and Paul expressed support for the House war powers resolution that was passed Thursday to restrain Trump on Iran.

In his mid-week remarks, Trump stepped back from the brink of all-out hot war on Iran — while continuing unlawful hostile actions against the country and others.

Republicans overwhelmingly support his anti-Iran rage. So do hardline Dems. Others opposing him on this issue do it for political reasons.

Both right wings of the US war party are hostile to all sovereign independent countries Washington doesn't control.

Republicans and Dems overwhelmingly support endless wars of aggression and/or by other means against these nations — why they rage in multiple theaters.

The US is a warrior state, a violent state at war on humanity at home and abroad, its criminal class bipartisan.

Iran is high on its list for regime change. If unsuccessful by economic terrorism, hot war could be launched one day — embroiling the region like never before if the US goes this far.