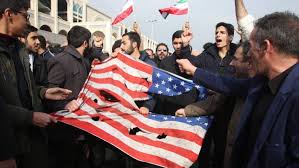 The Trump regime's assassination of widely respected Iranian General Qassem Soleimani made things less safe in the region and beyond.

Killing him was an act of war, the highest of high crimes under international law — turning millions of Iranians, Iraqis, others in the region, and elsewhere into raging US haters for good reason.

Soleimani was a peace champion, a leading regional force against the scourge of US-supported ISIS and likeminded terrorists.

Aggression by one country against another heightens the risk for greater conflict.

Further US hostile actions in the Middle East are virtually certain — no matter which extremist wing of the US war party is in charge.

He acted to "stop a war, not…start one" — another bald-faced Big Lie by the nation's liar-in-chief, his remarks making painful listening and reading.

Virtually nothing he says is credible.  It's simple to know when he's lying. Read his lips.

Ignore his rhetoric and tweets. Follow his actions and polls. Gallup tracking polls have his approval rating at 45% last month.

An early January FiveThirtyEight poll has his approval at 42.6% — noting that it's the lowest for a US presidential aspirant since Gerald Ford lost to Jimmy Carter in 1976.

Pew Research data based on respondents in 32 countries show 64% of those surveyed have no confidence in Trump, only 29% expressing support.

A new USA Today/Ipsos poll showed 55% of respondents believe killing Soleimani made the US less safe, only 24% saying it's safer in the aftermath of what happened — 62% fearful that war with Iran is more likely following his assassination.

Over half of respondents called Trump's anti-Iran agenda "reckless."

A new Reuters poll showed 54% of Americans disapprove of Trump's actions toward Iran, only 37% expressing support.

On five talk shows last Sunday, Pompeo lied to the US public, saying Soleimani's elimination made the US "100% safer."

During a Tuesday press briefing, his Big Lies continued nonstop.

He lied about ongoing protests in Hong Kong with US dirty hands manipulating them, falsely claiming the Trump regime supports "human rights and fundamental freedoms," what GOP and Dem hardliners want eliminated everywhere.

He lied claiming Iran is involved in Afghanistan, "actively working to undermine the peace process by continuing its long global efforts to support militant groups there (sic)."

He expressed support for US-designated puppet Guaido in Venezuela, a reviled usurper with no legitimacy, defrocked as National Assembly head by other opposition MPs, accusing him of corruption.

On Iran, Pompeo lied claiming Soleimani was assassinated to prevent an imminent threat to US security, falsely accusing him of conducting a "terror campaign in the region" — a US, NATO, Israeli specialty, Iran dedicated to combatting the scourge of terrorism, Soleimani in the forefront of its campaign while alive.

Pompeo lied claiming his assassination was "legal," a notion responsible jurists explain is never the case for any reason.

Pompeo lied claiming Soleimani's diplomatic peace mission to Iraq on the day he was assassinated "was not true."

Iranian Foreign Minister Zarif explained it. Pompeo is pygmy in stature to his preeminence on the world stage.

"Zarif is a propagandist of the first order," he roared - a bald-faced Big Lie about a highly respected diplomat worldwide.

Pompeo continued to hype the nonexistent threat of an Iranian nuclear breakout toward the bomb.

The Islamic Republic nuclear program is the world's most intensively monitored by IAEA inspectors. Fully compliant with the NPT and JCPOA, it has no military component or intention to have one.

If all nations were governed like Iran, swords would become plowshares worldwide.

Peace and stability would replace endless US, NATO, Israeli wars of aggression.

Mutual cooperation among nations and multi-world polarity would replace Washington's rage to dominate other nations by brute force.