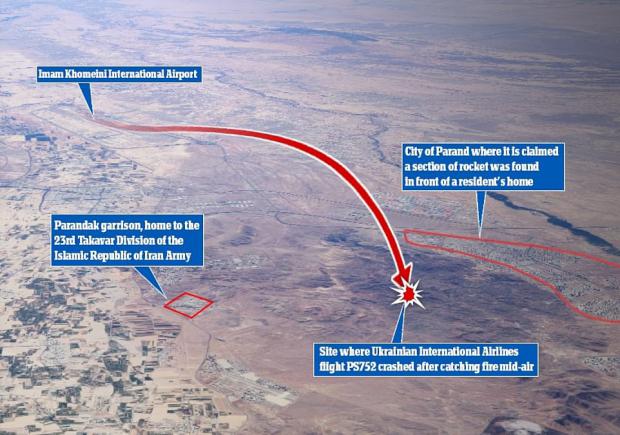 That's what state-sponsored propaganda is all about — supported by establishment media, operating as press agents for powerful interests, manipulating the public mind, suppressing hard truths on major issues.

All 167 passengers and nine crew members perished, including 135 Iranian and 32 foreign nationals.

Initially heading west, it changed course for an attempted landing because of a likely technical malfunction.

"They said the fiery missile strike could well have been a mistake amid rocket launches and high tension throughout the region."

A Reuters report was similar, saying the Ukraine aircraft "was likely brought down by an Iranian missile," citing Canadian PM Justin Trudeau and "intelligence from Canadian and other (unnamed) sources."

"From a scientific viewpoint, it is impossible that a missile hit the Ukrainian plane," adding:

"The plane caught fire three minutes into the flight, according to what the witnesses have reported and the data collected from the parts of the airplane."

"The pilot tried to return the airplane at the altitude of 8,000 feet, but due to the fire, the airplane crashed and exploded."

"We can say that the airplane, considering the kind of the crash and the pilot's efforts to return it to Imam Khomeini airport, didn't explode in the air. So, the allegation that it was hit by missiles is totally ruled out."

"(B)ecause the airplane was Ukrainian, Ukraine is obliged to cooperate with us, and has started cooperation. Their team of experts has arrived in Tehran, and we have coordinated the issue with them on different aspects."

"Iranian experts and the Ukrainian ones have had a meeting so that we could determine the cause of the incident in cooperation with the Ukrainian side."

An official investigation into the cause of the crash is underway.

"The Islamic Republic of Iran has begun investigation into the cause of this plane crash in accordance with the international standards and the ICAO's (International Civil Aviation Organization's) criteria, and has invited Ukraine, as the owner of the plane, and the Boeing company, as the plane manufacturer, to take part in the investigation," he explained, adding:

"The Islamic Republic of Iran welcomes the presence of experts from the countries whose nationals have been killed in the tragic incident, and requests the Canadian prime minister and any other government with information about this issue to give the information to the committee investigating the incident in Iran."

They were launched in retaliation for the Trump regime's assassination of IRGC Quds Force commander General Qassem Soleimani — an act of war by the US against Iran.

Both incidents were unrelated, no credible evidence suggesting otherwise.

Western sources "are spreading propaganda that the Ukrainian flight was targeted. This is ridiculous," adding:

"Most of the passengers on this flight were our valued young Iranian men and women.

"Whatever we do, we do it for the protection and defense of our country and our people."

Separately, Ukrainian authorities ruled out terrorism, suggesting likely engine failure, what an analysis of the crash site and black boxes aboard the doomed aircraft will likely determine.

Falsely claiming an Iranian missile may have brought down Ukraine Airlines Flight 752 is similar to wrongfully accusing Russia for downing Malaysian Airlines MH17 on July 17, 2014 in eastern Ukraine airspace.

The latter Big Lie persists despite no credible evidence proving it, plenty of evidence debunking it.

It'll likely be months before it's officially known why Ukraine Airlines Flight 752 went down.

There were no credible reports of satellite images showing one or more missiles in Iranian airspace before the Ukraine airliner crashed.

When the cause is determined and publicly announced, it'll no doubt cite a technical malfunction, not an Iranian missile responsible for what happened.

"From a scientific viewpoint, it is impossible that a missile hit the Ukrainian plane," adding:

"The plane caught fire three minutes into the flight, according to what the witnesses have reported and the data collected from the parts of the airplane."

"We can say that the airplane, considering the kind of the crash and the pilot's efforts to return it to Imam Khomeini airport, didn't explode in the air. So, the allegation that it was hit by missiles is totally ruled out."

Press TV also reported that five unnamed Western "security sources," three US ones, a European, and a Canadian one, said a technical malfunction likely caused the crash, not a missile.

This is an example, but only a more obvious one, of what I think accurately describes Mr. Lendan: As Mary McCarthy said of Lillian Hellman: "Every word she writes is a lie, including and..."

If they tried to turn around why does the drawing show no evidence of a turn around? If it was not a air to air missal why are they holding the black boxes? If it was an engin fire why is the climb rate not indicate that? Were is the radio audio of the pilots declaring an emergency .