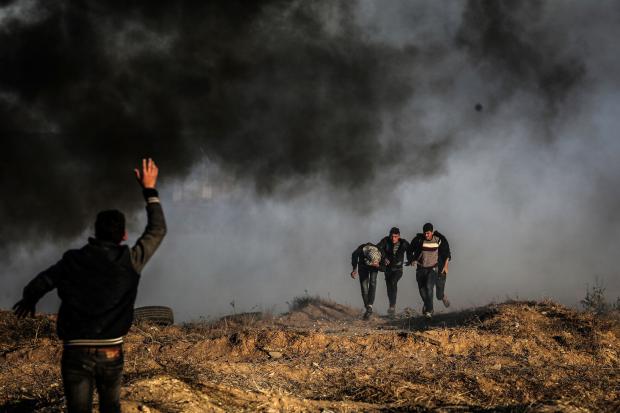 Millions of Palestinians endure Israeli state terror throughout the year, an entire population collectively punished, besieged Gazans harmed most of all.

There's no end to the torment of all Palestinians in prospect because the world community fails to hold Israel accountable for its high crimes of war, against humanity, and other atrocities against long-suffering people, punished for not being Jewish.

Reviewing their decades of suffering, B'Tselem called what's going on "the abomination that is the occupation," adding:

Virtually all Palestinians bear "physical and emotional scars" that will remain for "generations to come," asking:

"(I)s there even a single Palestinian family that remains completely unscathed?"

"Is there a family in which not a single member underwent humiliation, or was arrested, beaten, injured or killed?"

"Is there but one such family among the five million people who are trodden under our boots every day?"

The cross borne by virtually all Palestinians is militarized occupation repression, state terror affecting their daily lives, mass arrests and imprisonments for political reasons, torture, other abuses, and virtually every imaginable form of indignity and unaccountability since before creation of the Jewish state.

On December 23, the Addameer Prisoner Support and Human Rights Organization denounced decades of Israeli torture of Palestinians with impunity.

"There has never been any individual or agency held accountable for the well-documented crimes of torture and ill-treatment at Israeli prisons and interrogation centers," said Addameer, adding:

"The occupation authorities, in particular, the Israeli intelligence agency Shabak' resorts to torture and ill-treatment as standard operating procedure in a systematic and wide-scale approach against Palestinian detainees."

"Over the past three months (alone), the intelligence agency subjected a number of detainees at Israeli interrogation centers to severe physical and psychological torture without any form of monitoring and protection."

"Addameer has hard evidence on the crimes of torture and ill-treatment committed against a number of detainees held at interrogation centers since late August 2019."

"Addameer was banned from publishing any of the details of torture prior to this date, due to a gag order issued by the Israeli Court of First Instance in Jerusalem."

Under Israeli military law for the Occupied Territories, Palestinians can be detained indefinitely for any reason — charged or uncharged.

Detainees can be denied legal representation or contact with family members for weeks, even months, at Israel's discretion.

Horrific mistreatment results in broken bones, other physical injuries, fainting, vomiting, and bleeding from different parts of their body.

They're denied edible food, medical care, or too little to matter. Women, children, and youths are mistreated as harshly as men.

In Occupied Palestine, the rule of law is nonexistent. Israel does what it pleases because there is no accountability, not now or earlier, Palestinians denied their fundamental rights.

Yet international law is clear and unequivocal. Torture is banned at all times, under all circumstances, with no allowed exceptions.

Like the US, Israel operates by its own rules, doing whatever it wants because of no accountability for its high crimes.

B'Tselem has been documenting them for 30 years, its work not enough, it lamented, saying:

"Only decisive international action can change the balance of power, change reality, and bring about an end to the occupation."

Yet it believes the day will come when millions of Palestinians and Israelis between the Jordan River and Mediterranean Sea will "live in equality," their human rights respected.

Every victory against injustice perhaps advances things closer to what B'Tselem envisions.

On December 12, a small one was achieved. The UN Committee for the Elimination of Racial Discrimination (CERD) criticized Israeli apartheid practices on both sides of the Green Line.

"This could have far-reaching implications for defining the character of the Israeli regime by international legal bodies," said Adalah.

Calling on Israel to come into compliance with international law isn't good enough.

Punishing its senior political and military officials harshly is the only way to get their attention.

Expelling Israel from the world body would be a good beginning, along with convicting and imprisoning its most culpable officials for high crimes too grievous to ignore any longer.