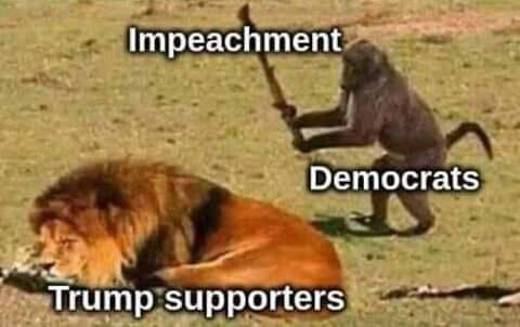 Impeachment of Trump by House Dems has nothing to do with removing him from office — everything to do with weakening him ahead of November presidential and congressional elections.

Dems' aim is all about hoping their scheme will put one of their own in the White House, regain Senate control, and retain control of the House.

That's what impeaching Trump is all about. Based on polling data, it's not working as planned.

According to Real Clear Politics, Trump's average approval rating from multiple polls in January is 44.6%, 52.4% disapproving of his performance as president.

These numbers are similar where he's stood in the eyes of the public since taking office, notably since spring 2018.

A new FiveThirtyEight poll released Wednesday has his approval at 42.2%, disapproval at 53%, slightly different from the above average.

Voting almost exclusively along party lines, House members impeached Trump on December 18 for abuse of power and obstruction of Congress.

The former charge claimed Trump sought foreign interference from Ukraine in the US 2020 presidential election.

Ukrainian President Zelensky debunked the accusation, publicly saying there was no Trump blackmail threat, no quid pro quo, no conspiracy, nothing discussed about withholding US aid for political reasons.

The second article of impeachment claimed Trump "directed the unprecedented, categorical, and indiscriminate defiance of subpoenas issued by the House of Representatives pursuant to its sole Power of Impeachment," adding:

"(W)ithout lawful cause or excuse, President Trump directed Executive Branch agencies, offices, and officials not to comply with those subpoenas."

Nor did urging current and former regime members not to cooperate with Dems because proceedings lacked legitimacy.

Pelosi withheld the articles of impeachment from the Senate for nearly a month. Pressuring Majority Leader Mitch McConnell to accept her terms for trial failed.

Beginning next Tuesday, exoneration is virtually certain along party lines in the GOP-controlled upper house when trial proceedings conclude.

A two-thirds super-majority is needed to convict and remove Trump from office.

Calling her handling of proceedings a "blunder of the first order," Turley said her delaying strategy "jeopardize(d) not just (Trump's) trial but the rules governing impeachment."

Delay benefitted Trump by downplaying the Dems' urgency of trial for resolving the matter.

Turley: "Pelosi played into the hands of McConnell by first rushing this impeachment forward with an incomplete record and now giving him the excuse to summarily change the rules, or even to dismiss the articles."

Senate trial proceedings may last two or three weeks. It's unclear who'll appear as witnesses for the defense and prosecution, if any.

According to the Washington Post, "White House lawyers are trying to engineer the fastest impeachment trial in American history, aiming to have President Trump acquitted by the Senate without witnesses and after just a few days of proceedings," citing unnamed senior regime officials," adding:

"The White House, which previously supported a more expansive trial in the GOP-led Senate, has now accepted the idea that senators should make quick work of acquitting Trump."

Pelosi tried resurrecting the failed Russiagate hoax, saying "voters in America should decide who our president is, not Putin and Russia (sic)."

Whatever unfolds between next Tuesday and completion of Senate trial proceedings, its result is already known.

Dubious charges against Trump don't rise to the level of "treason, bribery, or other high crimes and misdemeanors."

Under the Constitution's Article II, Section 4, impeachment, conviction, and removal from office requires proving these charges.

No legitimacy exists to impeach Trump on dubious charges brought against him by Dems.

Clear just cause exists to impeach, convict, and remove him from office for crimes of war, against humanity, and betraying the public trust by serving monied interests exclusively at the expense of ordinary people he greatly harmed at home and abroad.

Of course, that's impossible because the vast majority of Republicans and Dems share guilt.

The Capitol Hill Blue website states: "Nobody's life, liberty or property is safe while Congress is in session or the White House is occupied."

The corrupted US system is too debauched to fix — a one-party state with two right wings, a plutocracy, not a democracy.

Elections when held are farcical. If anything changed positively, they'd be banned.