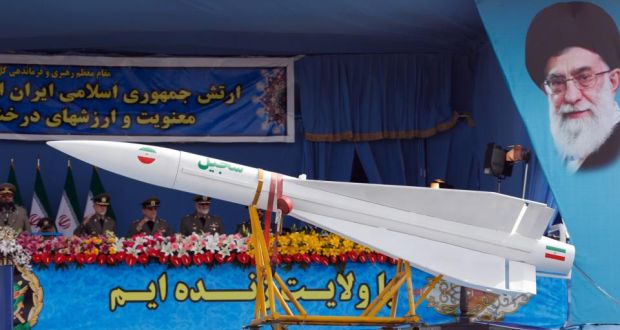 Big Lies repeated enough get most people to believe them, especially when establishment media report them.

"Iran, a country without nuclear weapons, is threatened with atomic annihilation by…warmonger" Netanyahu.

No evidence suggests an Iranian intention to develop and produce nukes. Plenty of evidence indicates otherwise.

If E3 nations observe their mandated JCPOA obligations they've breached since the Trump regime's unlawful May 2018 withdrawal from the deal, Iran will again fulfill its voluntary commitments under the agreement.

Its uranium enrichment is increasing up to a 20% level, far below highly enriched 90% purity required for nuclear weapons development.

According to World Nuclear. org, about 90% of highly enriched weapons-grade uranium is located in the US, Russia, Britain, France and China — none in Iran, a significant amount in Israel.

The 1970 Nuclear Non-Proliferation Treaty bans all UN member states from developing and producing nuclear weapons except for the above five countries — while committing them to eventually eliminate their arsenals.

Israel is nuclear armed and dangerous, an undisclosed number of warheads in its arsenal and delivery systems able to use them against adversaries.

The Obama and Trump regimes pledged to spend over $1 trillion over several decades to strengthen and upgrade US nuclear weapons capabilities.

In January 2011, then-Israeli military intelligence chief Aviv Kochavi said Iran can have a nuclear bomb in one to two years, adding:

"The question is not when Iran will have the bomb. The question is how long it will take for an Iranian leader to decide to have the centrifuges start enriching at 90 percent" — a bald-faced Big Lie at the time repeated countless times since then.

In 2012, an AP News report cited unverified information, alleging Iranian scientists ran computer simulations for a bomb with threefold the explosive force of the nuke that destroyed Hiroshima.

In February 2013, Yadlin falsely claimed Iran could have a bomb in four to six months, saying at the time:

"Iran has completed in the last two years two components that…give it all of the necessary means to manufacture a nuclear weapon as soon as it chooses to do so."

No development to produce them existed then, earlier, or now.

In April 2016, Haaretz asked: "What happened to the Iranian bomb?"

"The entire political establishment adopted Netanyahu's nightmare scenarios regarding Iran. Nobody in Israel ever paid a price for prophecies of woe that never came true," adding:

"After 15 years of" warning about an Iranian nuclear bomb threat, no evidence suggests it's being developed in the country.

Netanyahu's nightmare scenario repeated by other regime officials is pure myth without substance.

Time and again, Iranian authorities stressed their abhorrence of these weapons, wanting them banned and eliminated everywhere.

Ayatollah Ruhollah Khomeini refused to develop nuclear weapons in response to thousands of Iranians killed by Saddam Hussein's use of banned CWs, tens of thousands virtually disabled by chronic diseases from exposure to these toxins.

Endless Israeli claims about an Iranian bomb without credible evidence backing them are groundless.

Reporting on Iran by US establishment media is one-sided, repeating official narrative Big Lies, ignoring high crimes committed by the US, NATO, and Israel.

They threaten humanity. Iran threatens no one.

On Friday, the NYT headlined: "Trump says the US is ready for war." He said his regime is "ready and prepared to take whatever action is necessary" against an Iranian threat that doesn't exist.

"All is well! Missiles launched from Iran at two military bases located in Iraq. Assessment of casualties & damages taking place now. So far, so good!"

He ignored significant damage to US military equipment and facilities on both bases, reported by journalists permitted to see for themselves what happened.

Army Capt. Geoffrey Hansen said he and his men were knocked off their feet by blasts even though in bunkers for protection.

Sgt. Westley Kilpatrick said "(w)e weren't quite expecting the attack with the missiles. It was a lot bigger than we were expecting."

Trump's claim of no casualties was debunked. On Thursday, a statement by Combined Joint Task Force-Operation Inherent Resolve said:

"(W)hile no US service members were killed in the Jan. 8 Iranian attack on Al Asad Air base, several were treated for concussion symptoms from the blast and are still being assessed," adding:

"Out of an abundance of caution, some service members were transported from Al Asad Air Base, Iraq to Landstuhl Regional Medical Center in Germany, others were sent to Camp Arifjan, Kuwait, for follow-on screening."

Reportedly 11 US military personnel were injured, along with extensive damage to the bases struck, showing Iran's military capabilities are a force to be reckoned with.

If the Trump regime attacks Iranian territory or personnel again, harsh retaliation no doubt will follow.