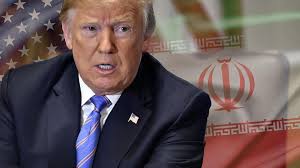 "(W)e must all work together toward making a deal with Iran that makes the world a safer and more peaceful place (sic)."

That's precisely the JCPOA's aim — even though the world community knows Iran's nuclear program has no military component, never did, abhors nukes, wants them eliminated everywhere, and banned their development internally.

It's well know that the Islamic Republic never attacked another country, threatening none except in self-defense if attacked, its legitimate right under international law.

The way to "make the world a safer and more peaceful place" is for the US to end its forever wars on one country after another.

Trump's abandonment of the JCPOA jeopardizes regional peace, stability and security — including pressure on Britain, France, Germany, and the EU to breach their mandated obligations under the deal, effectively killing it.

Trump's agenda toward Iran is all about wanting its sovereign independence replaced by pro-Western puppet rule, along with gaining control over its vast hydrocarbon resources and eliminating Israel's main regional rival.

His notion of a new nuclear deal is something along the lines of unacceptable demands by Pompeo in May 2018.

His chief "diplomat" falsely called the JCPOA beset with "fatal flaws," falsely accused Iran of "l(ying) for years about having had a nuclear weapons program," falsely said "Iran entered into the JCPOA in bad faith (and) continues to lie" about its nuclear program (sic).

Calling "mechanisms for inspecting and verifying Iran's compliance with the deal…not strong enough," he falsely accused the IAEA of failing to do its job.

Iran's nuclear program is the world's most intensively monitored. It's fully compliant with its Nuclear Non-Proliferation Treat (NPT) and JCPOA obligations.

Pompeo lied claiming Iran's "ballistic and cruise missiles (can) deliver nuclear warheads." They're not designed to carry them. No evidence suggests otherwise.

Its strength gives Pentagon and IDF commanders pause about attacking a nation able to hit back hard against an aggressor.

Pompeo falsely accused Iran of "spending its resources fueling proxy wars across the Middle East…perpetuat(ing) a conflict that has displaced more than 6 million Syrians" internally and millions more "outside its borders" — falsely blaming Iran for US aggression in Syria, using jihadists as imperial proxies, supported by Pentagon terror-bombing.

Iranian military advisors are involved in Syria and Iraq in combatting US-supported terrorism, not fostering it anywhere.

No "Iranian aggression" exists against any other country — a US, NATO, Israeli specialty.

Pompeo demanded Iran cease all uranium enrichment and pledge no plutonium processing ever. The JCPOA permits enough of the former for energy use and research.

Pompeo: Tehran must allow "unqualified access to all sites throughout the country," including off-limits military ones under the JCPOA.

Its "government must cease its regional military activities." Its advisors are solely involved in combating US supported terrorists in Syria on request of its government, aiding Iraq the same way.

US citizens held by Iran must be released, no matter what offenses they're accused of committing.

The Islamic Republic "must cease being a threat to Israel." It never was and isn't now, the Jewish state a major threat to regional and global security.

It "must end its…ballistic missiles…launching or development of nuclear-capable missile systems" – the latter something it doesn't have or want, the former it has every right to develop.

It "must…permit the disarming, demobilization, and reintegration of Shia militias" in Iraq. Tehran supports what Washington rejects – Iraqi sovereignty and right to self-defense.

Iran must "cease harboring senior al-Qaida leaders" – a US specialty, the Islamic Republic strongly opposed to the scourge they represent.

"Iran…must end the IRGC Quds Force's support for terrorists and militant partners around the world." What Iran abhors, Washington supports.

Pompeo called for a Senate-ratified treaty replacing the JCPOA. He and the Trump regime want Iran transformed into a defenseless US vassal state, its sovereign independence eliminated.

They want what no responsible leadership would agree to anywhere.

They refuse to deal with the Trump regime, especially in the wake of General Soleimani's assassination by DJT OK'd terror-bombing.

His unlawful withdrawal from the JCPOA, abandonment of the INF Treaty, and unacceptable demands against Iran and other sovereign independent states is further evidence that the US can never be trusted.

Time and again breaching international treaties, Security Council resolutions, the UN Charter, and other international laws shows diplomacy with the US accomplishes nothing.

Whatever one US regime agrees to, a successor may abandon.