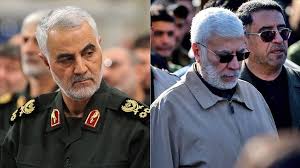 MEE claimed his appointment is "part of a wider plan brokered by Hezbollah leader Hassan Nasrallah to quell tensions between the groups and create a 'united resistance' to US troops in the country."

"All these meetings were attempting to gather the factions after they have been devastated in an unprecedented way" by the Trump regime's assassination of two redoubtable commanders.

He called for a "million-man march, a unified demonstration to condemn the American presence and violation, wanting US troops  expelled from Iraq, adding:

"The skies, land and sovereignty of Iraq are being violated every day by occupying forces."

Separately by letter to Iraq's parliament, he reportedly listed demands, including immediate cancellation of the security agreement with Washington, closure of the US Baghdad embassy, expulsion of US and allied troops in a "humiliating manner," and criminalization of communication with the Trump regime.

The Monday meeting in Oom was attended by Kata'ib Hezbollah representatives, 25 of their fighters killed by US terror-bombing.

According to Sadrist Movement official Amir al-Kanani, the proposed "million-man march" and related activities are to push Iraqi ruling authorities and parliamentarians for quick action to expel the Americans.

The march to be held in Baghdad and other Iraqi cities may be in days, possibly this week.

"We call on our people, who reject humiliation and subjugation, to take part (in the march), raising the moto 'No to US presence,' and standing united under the Iraqi flag."

MEE reported that "(c)ommanders and senior officials within most of the most prominent pro-Iran armed factions, including Asaib Ahl al-Haq, Kataeb Hezbollah, Kataib Jund al-Imam, Kataib Sayyid al-Shuhada and Kataib al-Imam Ali, arrived in Beirut on Thursday in response to Nasrallah's call for them to 'set aside differences' " — uniting against the hostile US presence.

"The aim of the meeting with Sadr was to prepare the ground for the creation of a united resistance front to dislodge the American forces and all foreign forces from Iraq and coordinate to unify the positions," according to an unnamed official involved in what's going on.

The Trump regime's assassination of Soleimani and Muhandis turned millions of Iranians, Iraqis, and others in the region into raging US haters — wanting Pentagon and other foreign troops expelled from Iraq and elsewhere in the region.

Leftists panic as video of Joe Biden surfaces, endorsing the invasion of Iraq...