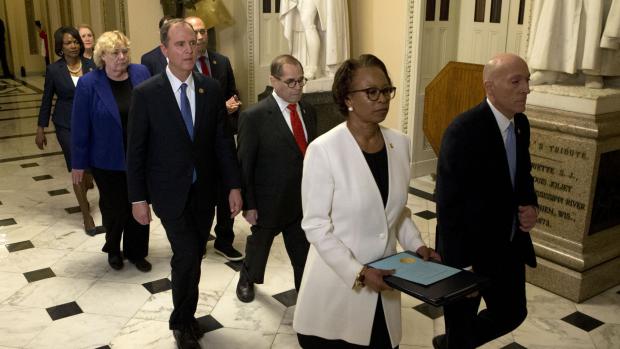 There's overwhelming just cause to impeach and remove Trump from office for legitimate high crimes.

The same is true for most of his predecessors, along with most current and former congressional members.

The Constitution's Article II, Section 4 states "(t)he President, Vice President and all civil officers of the United States, shall be removed from office on impeachment for, and conviction of, treason, bribery, or other high crimes and misdemeanors."

Evidence supporting the removal of Trump from office for abuse of power and obstruction of Congress, rising to the level of impeachable offenses as constitutionally defined, is lacking — charges against him by undemocratic Dems politicized.

Unrelated to removing him from office by Senate trial, they're all about wanting him delegitimized and weakened ahead of November 2020 elections.

Ahead of proceedings to begin on Tuesday, Trump's legal team formally slammed what's going on as a "brazen and unlawful attempt" to overturn results of the 2016 presidential election. More on this below.

Under his command, General William Sherman's march to the sea involved rape, pillaging and mass murder.

His Emancipation Proclamation didn't free a single slave. He wanted them deported at war's end to maintain America as a white supremacist society.

Glorifying him as one of the nation's greatest presidents ignores his dark side.

History taught Americans in secondary school, college, graduate school and in doctoral studies conceals the US dark side.

Slave owners Washington, Jefferson, and other US presidents diminished their moral and ethical standing, clearly not believing that all Americans are created equal.

Despite his lofty rhetoric and intellectual pursuits, Jefferson knew slavery was wrong, but owned them anyway, never freeing them like Washington.

He had a slave as mistress and lied about it. He or Washington could have set an example by freeing the nation's slaves, neither figure having the courage to do the right thing.

Samuel Johnson asked: "How is it that we hear the loudest yelps for liberty from the drivers of Negroes?"

According to historian Stephen Ambrose, "(o)f all the contradictions in Jefferson's contradictory life, none is greater," adding:

"Of all the contradictions in America's history, none surpasses its toleration first of slavery and then of segregation."

Ambrose omitted endless US wars throughout most of the nation's history — from exterminating Native Americans to ongoing war on humanity.

Washington reviled the nation's native people, calling them "wolves" and "beasts of prey."

He dispatched General John Sullivan to attack noncombatant Onondaga people in 1779, ordering him to destroy their villages, homes, fields, food supplies, cattle herds and orchards, wanting as many as possible killed. He stole Indian land.

Dem Woodrow Wilson's tenure was defined by US involvement in WW I — after pledging to keep America out of Europe's war.

It was also disgraced by signing the 1913 Federal Reserve Act into law, giving Wall Street control of the nation's money, the supreme power above all others.

Policies under Franklin Roosevelt pressured imperial Japan to attack the US, giving FDR the war he wanted.

US history isn't pretty, Trump the latest in a long line of presidents whose policies supported wealth, power and privilege exclusively over peace, equity and justice, notions considered un-American — based on policies pursued by its ruling class throughout US history.

Bush/Cheney waged US war OF terror, not on it in Afghanistan, Iraq, and against Muslims in America, numerous police state laws enacted on their watch.

He institutionalized indefinite detention, authorizing the military to indefinitely detain anyone anywhere without charge, including US citizens, based on suspicions or spurious allegations.

His disposition matrix kill list ordered the elimination of alleged enemies of the state.

Trump exceeded the worst of his predecessors' domestic and geopolitical policies — filling the swamp he pledged to drain with neocon hardliners, militarists, and super-wealthy individuals like himself.

He broke virtually everyone positive promise made, operating in bad faith, never to be trusted, while waging war on humanity at home and abroad.

Yet none of his legitimate wrongdoing is included in impeachment charges against him.

On Saturday, his legal team led by White House counsel Pat Cipollone and personal attorney Jay Sekulow submitted a six-page response to impeachment charges against him — ahead of Senate trial proceedings to begin this week.

Rejecting charges by Dems, it said "articles of impeachment (they) submitted are a dangerous attack on the right of the American people to freely choose their president," adding:

"This is a brazen and unlawful attempt to overturn the results of the 2016 election and interfere with the 2020 election — now just months away."

"Nothing in these Articles could permit even beginning to consider removing a duly elected President or warrant nullifying an election and subverting the will of the American people. They must be rejected."

Rejection is virtually certain in the GOP-controlled Senate, trial proceedings likely to conclude in two or three weeks.

No president in US history was removed from office by impeachment, Trump highly unlikely to be the first.