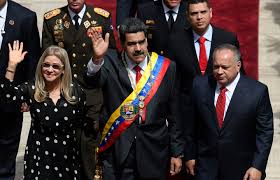 Trump regime designated puppet/self-declared Venezuelan president Guaido is an imposter, elected by no one.

Widely despised by most Venezuelans, even members of his own party reject him over corruption charges and other wrongdoing.

Bolivarianism is polar opposite US governance of, by, and for its privileged few exclusively.

Unlike how Washington operates, the Bolivarian Republic serves all its people equitably, devoting most of its revenue to social programs and other domestic needs.

It has no secret torture prisons, doesn't threaten or invade its neighbors, engages with them cooperatively, supporting unity and solidarity, opposing neoliberal harshness, championing populism, conducting open, free and fair elections – polar opposite US money controlled ones.

Venezuelan democracy is the real thing, why both right wings of the US one-party state want it transformed into a subservient vassal state, pro-Western puppet rule replacing governance of, by, and for all Venezuelans equitably.

Interviewed by the Washington Post last week, Maduro expressed willingness to engage in dialogue with Trump — surely knowing the US under his leadership or anyone else can never be trusted.

Yet he said "(i)f there's respect between governments, no matter how big the US is, and if there's a dialogue, an exchange of truthful information, then be sure we can create a new type of relationship," adding:

Whatever one US regime agrees to, a successor may abandon, proved time and again.

The US under both wings of its war party is intractably hardline toward all nations it doesn't control, wanting pro-Western puppet rule replacing their sovereign independence.

The US has been hostile to Venezuela for 21 years, Iran for over 40 years, Cuba for over 60 years, North Korea and China throughout the post-WW II era, and Russia throughout Putin's tenure as president and prime minister — not because he or these nations threaten the US, because of their sovereign independence, free from US control.

The US demands all nations subordinate their sovereign rights to its interests.

Ones unwilling to become client states are targeted for regime change by hot wars, color revolutions, old-fashioned coups, or making their economies scream.

Maduro said he extended outreach to Trump several times with no response. He believes Pompeo manipulated him to pursue a failed agenda against Venezuela, adding:

"Pompeo lives in a fantasy. He's not a man with his feet on earth. I think Trump has had terrible advisers" — referring to him, now departed Bolton, and envoy for regime change in Venezuela Elliott Abrams.

After throwing everything in their bag of dirty tricks, short of hot war, against Russia, China, Iran, Venezuela, Cuba, and other countries, they achieved nothing.

Maduro told WaPo he doesn't care what the US and Europe do. "We only care about what we do…No matter how many thousand sanctions, they won't stop us, or Venezuela."

He maintains close ties to Russia, China, and other countries. "We are more united than ever," he stressed.

Perhaps so in public remarks by UK, French and German officials.

Yet agendas of their governments remain anchored to Washington — notably allying with its wars, breaching the JCPOA, killing the landmark agreement, maintaining hostility toward Venezuelan social democracy, and failing to challenge other hostile US policies.

Though the US is a nation in decline, one day to go the way of all other empires in world history, major change comes slowly.

European and most other nations bow to its will. What can't go on forever won't.

The US is its own worst enemy because of its rage for dominion over planet earth, its resources and populations.

At the height of its power post-WW II, it's declining while other nations are rising, notably post-9/11.

The notion of American exceptionalism and moral superiority are more myth than reality.

Venezuela and the Paradox of Plenty: A Cautionary Tale About Oil, Envy, and Demagogues