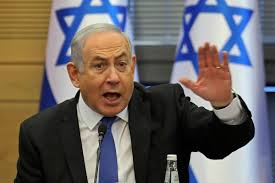 Charged with bribery, fraud, and breach of trust by attorney general Avichai Mendelblit, Netanyahu is fighting for his political life and personal freedom.

According to Mendleblit, Netanyahu "damaged the image of the public service and public trust in it (by abusing his office), knowingly "taking a bribe as a public servant in exchange for actions related to your position."

Attempting to dismiss charges against him last fall, he falsely claimed there's "an attempted government coup against the prime minister through blood libels and a biased investigation process (sic)," adding:

"I will not allow lies to win (sic). I will continue to lead this country, according to the letter of the law" he breached, according to serious charges against him.

"I intend to approach the speaker of the Knesset in accordance with chapter 4C of the law, in order to fulfill my right, my duty and my mission to continue to serve you for the future of Israel (sic)," adding:

"It's my intention to stand before the court to shatter all the fabricated accusations against me (sic)."

"The immunity law is meant to protect elected officials from tailored lawsuits, from serving political cases whose aim is to harm the will of the people (sic)."

In April and September 2019 elections, his Likud party won 26% and 25% of Knesset seats respectively, around three-fourths of the Israeli electorate ("the will of the people") voting against him.

On Sunday, Knesset speaker Yuli Edelstein said the body will convene in special session next week to vote up or down on forming a panel to consider Netanyahu's immunity from prosecution bid, adding:

"Even though I disagree with the position of the Knesset legal adviser (Eyal Yinon), I believe that, in order to maintain trust in the institution of Knesset speaker by all the factions, it is important to accept it."

He considers Netanyahu's bid "invalid…constituting contempt of the legislature" that's in recess ahead of March 2 elections.

As things now stand, his immunity request from prosecution in three criminal cases with considerable evidence against him is expected to be rejected.

He and Likud party members supporting him sought to delay Knesset action, knowing a majority of its members likely oppose his immunity bid.

He wants things delayed until after March 2 elections, hoping for a mandate to rule along with coalition partners he failed to achieve in April and September elections.

"Netanyahu is applying every possible form of pressure in an attempt to prevent the discussion of the immunity request, but despite the delay tactics, the immunity discussions will begin next week, will be conducted in a to-the-point manner and fairly, and will be completed before the election."

According to Israeli media, Knesset debate on this issue is likely to begin next week and continue until about two weeks before March 2 elections.

Israeli Law Professor Suzie Navot said immunity is unlikely for bribery, fraud and breach of trust, only for minor offenses under Israeli law.

On December 30, Haaretz editors called Netanyahu's immunity bid an attempt "to garner public support for his reckless conduct and his flight from the arm of the law," adding:

His request "for immunity is tantamount to an admission of guilt."

"His attempt to portray this as something temporary…reaches new levels of cynicism, constituting a blatant attempt to avoid a trial."

"Requesting immunity is a cowardly act by someone who has something to hide."

Have years of wrongdoing caught up to him? Will this year be his time of reckoning?

Will he be denied Knesset immunity, prosecuted, convicted, and imprisoned later this year, ending his political career and personal freedom?

No Israeli politician or military official was ever held accountable for crimes of war, against humanity, apartheid persecution, illegal occupation, and state terror — far more serious offenses than civil wrongdoing.