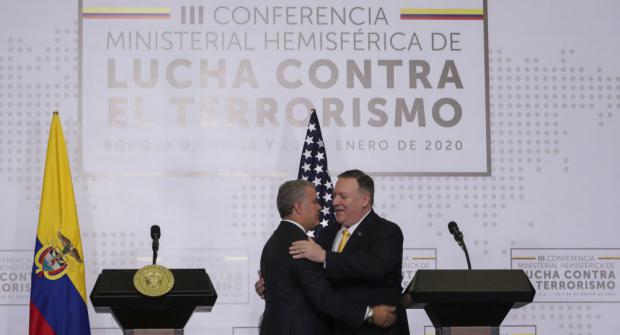 Fascist Colombia is a narco-terrorist state, providing an illicit drug super-highway to the US and other countries.

The nation is notorious for terrorizing and murdering trade unionists, campesinos, human rights workers, journalists, and others opposing ruthless regime policies, along with supporting US imperial interests.

On Monday, Pompeo showed up in Bogota at a so-called Western Hemisphere Counterterrorism Ministerial meeting.

The US and Colombia are the hemisphere's leading state sponsors of terrorism, notably hostile to peace, equity, justice, the rule of law, and sovereign independent democracies like Venezuela.

Pompeo thanked Colombia and fascist regimes in other regional countries for supporting US-designated puppet/political nobody Guaido — ignoring his replacement as Venezuelan National Assembly head, rejected over corruption and related charges.

Claiming the Trump regime supports "democracy and prosperity" in Venezuela is polar opposite its aim, abhorring governance of, by, and for everyone equitably everywhere, especially at home — supporting prosperity for the few at the expense of the great majority.

Pompeo sounded daft claiming Lebanon's Hezbollah "found a home in Venezuela," never missing a chance to bash its social democracy and promote the fiction of an Iranian threat in his public remarks.

"We eliminated (Iranian General) Soleimani, and we strengthened our maximum pressure campaign of economic sanctions, diplomatic isolation, and strategic deterrence," he roared.

US hostility toward Iran, Venezuela, Russia, China, North Korea, and other sovereign independent countries comes at a time of its declining influence on the world stage.

The US under both right wings of its one-party state is the world's leading state sponsor of terrorism it pretends to be combatting, hardline regional regimes allied with its imperial agenda.

Pompeo's notion of hemispheric freedom is none at all under police state rule, wanting nations everywhere run as repressively as the US — serving its privileged class, exploiting ordinary Americans to serve it.

On Monday, Pompeo met with Guaido in Bogota, defying a travel ban by secretly leaving the country with foreign help, perhaps helicoptered cross-border to Colombia.

Defrocked as National Assembly head, he's more a political pariah than a year ago when he illegally self-declared himself Venezuelan president — elected by no one.

Widely despised at home, his support comes from the US and other hard-right regional and other Western regimes.

After meeting with Pompeo and fascist Colombian president Duque, he's heading to Davos for the annual billionaire's ball — aka World Economic Forum.

The annual event is a celebration of super-wealth, power, and privilege, attendees hellbent on accumulating more — benefitting by exploiting ordinary people everywhere.

This year marks the 50th Davos event. Running from January 21 - 24, reportedly over 100 billionaires are attending, along with heads of state and other political leaders, business CEOs and other officials, Trump, his Treasury Secretary Mnuchin, and others showing up to hobnob with monied interests.

Guaido is a skunk at the annual garden party, blocked from entering parliament at home.

Unwelcome on return home, he'll have to sneak cross-border to enter the country, the same way he illegally left.

Arrest, handcuffing, and a prison cell should await him on arrival. Guilty of treason and/or sedition, he should have been held accountable long ago.

US Undeclared War on China by Other Means