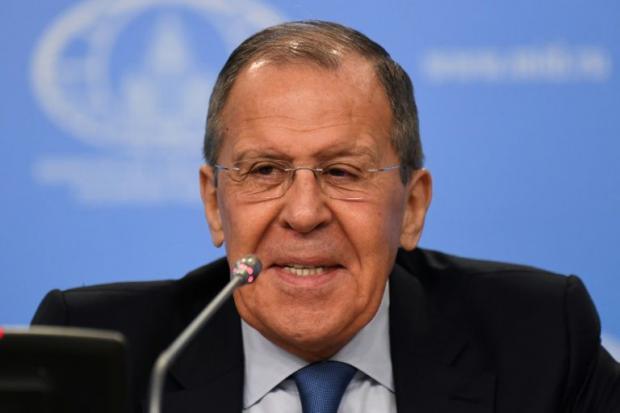 Asked what Russia is doing to combat terrorism, he said it poses a major threat to "international peace and security."

Failing to explain US dirty hands involved in creating and supporting ISIS and similar jihadist groups, Lavrov said Daesh "has not abandoned its plans to recreate the caliphate and is trying to spread its influence into Central and South Asia, build up its presence in the Asian Pacific region and promote interaction with Islamist groups in North and West Africa," adding:

"Their destructive actions could promote a serious aggravation even in the regions that are free from terrorism."

Fact: Their destruction actions depend on US support, operating where Washington wants their fighters used.

Fact: Without imperial backing, notably supplying them with heavy weapons, training them in their use, and directing their activities, ISIS and jihadists would be little more than nuisance guerrilla fighters.

Russia supports world peace and stability. Washington's agenda is polar opposite, waging endless wars, smashing one country after another, using ISIS and other jihadists as imperial foot soldiers.

Commenting on information security and combatting cybercrime, Lavrov said Russia is actively involved in addressing these issues internationally, including through the UN.

On Syria, Lavrov said most of its territory was liberated from the scourge of (US-supported) terrorism.

Efforts continue to eliminate jihadists in areas where they remain, notably in Idlib province, their last remaining stronghold.

As long as US forces occupy large northern and southern parts of the country, restoration of peace, stability, and security throughout its territory will remain unattainable.

On the Trump regime's no-peace/peace plan deal of the century, Lavrov accused the US of "add(ing) fuel to the fire by trying to make the existing international legal framework for the Palestinian settlement less clear," adding:

"We fundamentally disagree with the (Trump regime's) decision to stop considering the Israeli settlement activity a violation of international law…along with (recognizing) Israel's sovereignty over (occupied) Golan…and (unlawfully) moving its embassy to Jerusalem," a UN-designated international city.

The US under both right wings of its war party goes all out "to break the recognized international legal framework for the Middle East settlement."

Trump's no-peace/peace plan abandoned the notion of Israeli and Palestinian states co-existing side-by-side in peace — what US policy has been since the Jewish state's 1967 aggression, seizing Palestinian territory it didn't capture in 1948.

On Persian Gulf security, Lavrov slammed the US for blaming Iran for hostile regional actions no evidence suggests it had anything to do with.

Russia considers the January 3 assassination of Iranian General Soleimani and Iraqi de facto PMU commander Muhandis in Baghdad "a deliberate act that undermined security and stability in the region."

Establishment media accusations of Russian support for one warring side against the other in Libya are baseless.

According to Lavrov, Moscow urges "well-balanced approaches and has not sided with any party to domestic Libyan processes in the hope of obtaining any special dividends and preferences," adding:

The Kremlin "maintain(s) smooth relations with all of the country's influential public-political forces," seeking diplomatic resolution to endless conflict as a result of Obama regime 2011 aggression.

On Ukraine, Lavrov explained that Vladimir Zelensky's election last year "did not lead to progress in resolving" Kiev aggression in Donbass — because the US rejects conflict resolution, he failed to explain.

Ukraine is a hotbed of Nazi-infested fascist extremism in Europe's heartland.

Lavrov explained that dark forces in the country oppose use of "the Russian language," its nationals discriminated against, adding:

"Monuments are desecrated. History is being reviewed (and rewritten)."

"Books and films from Russia are banned, and soon people will be fined for using the Russian language. There are calls to cleanse Ukraine from Russian-speaking children."

Lavrov commented on other geopolitical issues. A key Russian objective is enlisting world community support for restoration of peace and stability in nations where it doesn't exist.

The US, NATO, Israel, and their imperial partners bear full responsibility for endless wars in multiple theaters — a key issue Lavrov failed to address.