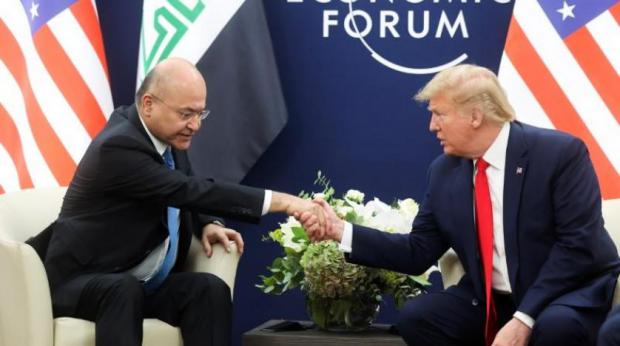 He ignored warnings from internal Shia militia groups that he'd be unwelcome back home if met with DJT.

The Iraqi presidency is largely symbolic, usually held by a Kurd. Iraqi Kurdistan officials favor the continued presence of US troops in the country — what PM Mahdi, majority MPs and most Iraqis oppose, wanting foreign occupation ended.

The group's security official Abu Ali al-Askari warned Salih against meeting with Trump, accusing him of "violating the will of the people (and) ignoring the pure blood spilled," adding:

"We emphasize the necessity of Barham Salih committing to not meeting stupid Trump and the squad of killers that accompany him."

"We will then say, 'you are not welcome, and our free children will work on expelling (you) from the honorable and mighty Baghdad.' "

"Trump has committed unforgivable crimes against the Iraqi people. How could Salih join hands with someone who has no respect for Iraq's sovereignty and the blood of its martyrs?"

"He positioned himself against the Iraqi people. We call on him to step down and not return to Baghdad. He is no longer welcome among us."

Another PMU group, Harakat Hezbollah al-Nujaba, said if Salih meets with Trump, "then Iraq and the people of Iraq will not accept or welcome the one who put his hand in the hand of criminals and terrorists, on whose hands is the blood of Iraqis," adding:

"Most Iraqi(s) consider this meeting treacherous. We no longer accept (Salih) as our representative and won't rest until he's held accountable for going against the will of the Iraqi parliament."

"He must step down and be banished from Baghdad."

"This is not time for another conflict. In my conversations with many actors in the region, everybody, everybody, almost everybody is saying, 'this is getting out of hand. Please cool it down. Restraint.' "

In his Davos address, he defiantly said "Iraq is indebted to the US-led coalition for its military and economic support which (it) continues to provide in the fight against ISIL (sic)."

He ignored US support for the jihadist group and the devastation caused by its fighters as directed by Washington earlier, notably in Mosul and Al Anbar province.

Reportedly the Trump regime is shifting thousands of Daesh jihadists from Syria to Iraq. Is it planning to unleash them like earlier as a pretext for pressuring Baghdad to permit continued US occupation of Iraq?

Trump defiantly said his regime will "do things on (its own) terms," saying nothing about PM Mahdi and Iraqi MPs wanting US and allied forces forces withdrawn from the country.

Instead adding: "(W)e're talking about a lot of different things, and you'll be hearing whatever we do."

"(T)hey like what we're doing and we like them, and we've had a very good relationship (sic)."

"(W)e'll see what happens…(W)e have a lot of very positive things to talk about (sic)."

As long as Iraq remains occupied by unwanted/widely despised US and allied troops, its sovereignty will be in name only — its security undermined.

In response to influential Shia cleric Muqtada al-Sadr's call for a "million-man march" against US troops in Iraq, the mass gathering is planned for Friday in Baghdad, Sadr saying:

If the Trump regime "continues to disregard Iraq's political and public will to expel US troops," it'll have to face the consequences.

Trump earlier threatened to impose sanctions on Iraq "like they've never been seen before" if Baghdad continues to demand US forces leave.

By phone with Pompeo following the Trump regime's assassination of Soleimani and Muhandis in Baghdad, PM Mahdi "requested that (US) delegates be sent to Iraq to set the mechanisms to implement the parliament's decision for the secure withdrawal of (foreign) forces from Iraq," adding:

"American forces had entered Iraq and drones are flying in its airspace without permission from Iraqi authorities, and this was a violation of the bilateral agreements."

Pompeo responded saying US troops aren't leaving, adding the Trump regime will only discuss reconfiguration of Pentagon involvement with the Iraqis, along with a greater NATO force presence in the country — what's clearly unacceptable to Baghdad.

"After the US aggression targeted the sons of Hashd al-Sha'abi (PMU) and counterterrorism leaders, the truth behind US military presence finally came to light, and it was revealed that American troops have not been deployed in order to help Iraq, and will not withdraw whenever the Iraqi government requests them to do so."

"Our country is now living in an occupation phase."

"Trump has said that he wants to control the Iraqi oil."

"Iraqi people have thwarted the US scenario of Daesh takfiri terrorist(s)."

"We will force the United States to withdraw from our country, and we will cleanse our country" of its presence.

Achieving this goal is the only way for Iraq to regain the sovereignty it lost to US aggression and occupation.