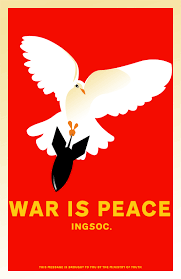 Trump may reveal his no-peace, deal of the century peace plan next week, according to reports.

Whenever released, it's unrelated to peace, what he's dismissive of, what hardliners in his regime and vast majority in Congress abhor, what Netanyahu supports, what Palestinians rejected before release because it serves Israeli interests exclusively at their expense.

It's served by endless conflicts, instability, and chaos, aiming for control over other nations, their resources and populations — what the scourge of imperialism is all about.

Why else would endless US direct and proxies wars have raged and continue raging throughout most of the post-WW II period.

Military Keynesianism defines how Washington pursues geopolitical agenda. What the Pentagon calls its "long war," I call forever wars, ongoing in multiple theaters post-9/11, smashing one country after another, others on the US target list for transformation into vassal states, the rule of law ignored, the human toll of no consequence.

Supported by both right wings of the one-party state, warmaking is prioritized, peacemaking considered unAmerican.

There's increasingly little public space to improve the quality of our lives, just the opposite with social justice on the chopping block for elimination.

If Trump is reelected in November, he'll slash Medicare, Medicaid, and perhaps Social Security if Republicans control both houses.

State capitalism reflects the American way, a government/business partnership, running a war economy for greater power and wealth at the expense of a nation in decline, corrupted leadership, lost industrialization, crumbling infrastructure, and suffering millions on their own, uncared for, unwanted, ignored, and forgotten to assure steady funding for America's wars, no matter the cost and enormous harm they cause.

Deindustrialization instead of reindustrializing the country goes on – millions of high-pay/good benefits jobs lost to low-wage countries. The exodus continues.

Wealth is transferred from ordinary people to its privileged class. Physical and human capital are undermined. There's increased vulnerability to hurricanes, widespread blazes, droughts, floods, and other natural disasters.

That's the deplorable state of today's America, a nation in decline, waging war on humanity to keep the sinking ship of state afloat at the expense or its ordinary people thrown overboard to serve privileged interests exclusively.

Except for Tulsi Gabbard, no presidential aspirant will do anything to change the dirty system if elected to the nation's highest office.

Intending otherwise disqualifies them as presidential material. No matter who holds high-level offices in the US, dirty business as usual continues seamlessly.

We have a choice between accepting unacceptable status quo conditions, or putting our bodies on the line for revolutionary change.

It's the only chance for governance the way it should be, achieved by activism, never the ballot box, voting a waste of time.

Everyone can do something. My choice late in life is daily writing and speaking out — criticizing what's destructive and unjust, supporting peace and democratic principles I believe in passionately.

That's what fighting the good fight for what's right is all about I intend to keep at as long as physically able to my end time.

That's what I'd like my epitaph to say, hopefully making a small difference, trying like hell every day, greatly admiring others in the struggle for justice.