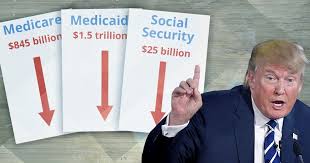 On the sidelines of the World Economic Forum in Davos, he was asked if cutting Medicare, Medicaid and Social Security is on his agenda.

"At some point they will be," he responded, adding: Cutting them is "the easiest of all things," falsely claiming greater economic growth that doesn't exist makes it possible.

His 2020 budget calls for large cuts in Medicare payments to hospitals.

Time and again, Trump as president showed indifference to equity and justice for the vast majority of Americans he doesn't give a damn about, ordinary people struggling to get by at a time the nation's privileged class never had things better.

According to Protect Our Care head Leslie Dach, Trump "made it clear that he wants to make draconian cuts to both Medicare and Medicaid — something that the American people vehemently oppose — and (at the WEF) he said he's going to try again" — wanting Social Security cut as well.

If Trump is reelected and Republicans control both houses, major cuts in Medicare, Medicaid, Social Security, and other social programs are likely coming, a chilling prospect for the vast majority of Americans.

According to Politico on Thursday, the Trump regime is preparing an assault on Medicaid.

The scheme involves letting states convert federal Medicaid funding to block grants, enabling them to use funds for any purpose other than restricting them to providing healthcare for the poor.

"(B)lock grants are just a Republican trick to slash spending without appearing to do so."

"Money is fungible. Medicaid funding will be used to pay for other programs or even to finance tax cuts."

"They (don't) keep pace with rising costs of healthcare. (Over 40%) of Medicaid (recipients) are children. The Trump (regime) know(s) that," but doesn't care about the needs of ordinary Americans, especially the most disadvantaged.

Medicare and Social Security are not entitlements. Both programs are federal insurance, funded by worker/employer payroll deductions.

They're contractual federal obligations to eligible recipients. That's how both programs were structured.

Though what was structured to provide inflation-adjusted retirement or disability income no longer works this way.

In cahoots with Wall Street, the way Washington calculates inflation has been rigged since the 1990s, greatly understating reality.

In 2020, America's 69 million Social Security recipients are getting a 1.6% so-called cost-of-living adjustment in 2020 — at a time of much higher inflation.

Reengineering it based on how calculated pre-1990, economist John Williams has it at 6%.

What's going on is part of the scheme to transfer wealth from ordinary people to corporate predators and high-net-worth households through tax cuts for the rich and other methods.

It's a "Health Insurance program for people age 65 or older, some disabled people under age 65, and people of all ages with End-Stage Renal Disease (permanent kidney failure treated with dialysis or a transplant)."

Hardliners in Washington want funds used for Social Security, Medicare, and Medicaid transferred to corporate interests and the super-rich.

They want social justice in the US eliminated, a slow-motion process ongoing largely since the neoliberal 90s, especially post-9/11.

The plot against social justice in the US is bipartisan, Dems complicit with Republicans in destroying the social safety net for the nation's least advantaged.

A Hillary presidency would have been as socially unjust as Trump.

Waging class warfare against the general welfare, dark forces in Washington and corporate boardrooms want the US returned to 19th century harshness.

They aim to destroy the remnants of collective bargaining, wanting workplaces turned into sweatshops, paying workers poverty wages, abolishing benefits, allowing child labor, agricultural and other wage-slave labor more than already, along with other dystopian objectives — making the US entirely unfit to live in for ordinary people.

Bipartisan hardliners and dark forces backing them want maximum federal revenues freed up for militarism, warmaking, and tax cuts for the rich, the nation's most vulnerable left increasingly on their own, middle America targeted for elimination, a nation of paupers replacing it.

Trump and hardliners surrounding him support this worldview, dystopian vision wrapped in the American flag — a road to hell paved with heart of darkness intentions.