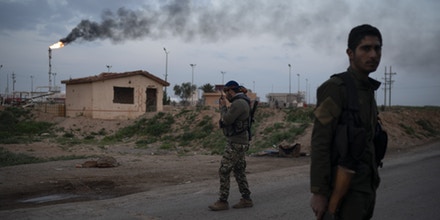 Throughout almost nine years of US-led aggression in Syria, numerous chemical weapons attacks by jihadists it supports were falsely blamed on government forces — despite no evidence proving it, plenty of evidence laying blame where it belongs.

US/Turkish-supported terrorists "are currently preparing to stage a (CW incident) in western Aleppo and Idlib to (falsely) accuse the Syrian army and push it to stop its (advance) in these areas," adding:

"(T)hese tricks and fabrications that the terrorists ruminate every time have become consumed and no longer deceive anyone and will not help achieving what the terrorist organizations and their supporters want."

"The military operations will continue until all Syrian territories are cleared of the terrorists and their crimes, especially that the world as a whole knows that the Syrian Arab Army never used this weapon and it no longer possesses it at all."

Syrian forces continue their advance against US/Turkish-supported jihadists in Idlib and surrounding areas.

On Monday, AMN News reported that advances by Syrian forces on "several fronts" in Aleppo province "intensified," the offensive slowed by "jihadist tunnels and sniper dens."

The Syrian Army is now advancing to capture the key town of Khan Touman, "located along this imperative highway."

The Aleppo/Idlib M-5 highway "serve(s) as a supply hub" for jihadists in northern Syria.

Operations continue to capture the city. Syria's al-Watan news service said government forces are "just around the corner" from the city, its "doors…wide open."

On Saturday, Syria's Foreign Ministry said the battle for Idlib and Aleppo provinces "will not stop until the elimination of those terrorists, who threaten safety and security of Syrian civilians," adding:

"The precise and well studied military operations carried out by the Syrian Arab Army and its allies in Aleppo and Idlib come after the appeals from the Syrian citizens in these two governorates, and in response to the systematic crimes committed by the armed terrorist groups which continue to exploit the unwavering military and logistic support provided by Western countries and their tools in the region."

Time and again, President Assad pledged to liberate Syria entirely from control by US-supported terrorists and the illegal presence of foreign occupying forces.

The struggle for Syria's soul continues, Russian support crucial to preserve and protect the nation's sovereignty and territorial integrity.