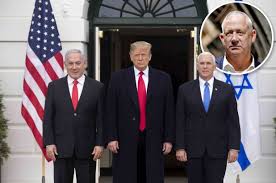 Netanyahu and Gantz Meeting with Trump Separately at White House

Both leaders conspired to try protecting Israel's prime minister from prosecution for bribery, fraud, and breach of trust — serious civil offenses, hard evidence proving them, according to Israeli AG Mendelblit.

Trump invited both Israeli officials to meet with him at the White House on Monday and Tuesday to discuss his no-peace/peace plan — Palestinians unwelcome at the meeting, their fundamental rights ignored like always before.

Reportedly Trump will release his pro-Israel scheme this week, no White House statement confirming it.

The meeting's timing comes ahead of an Israeli Knesset vote up or down on granting Netanyahu immunity from prosecution — most likely to go against him.

Israeli media reported that Netanyahu may withdraw his immunity request, knowing it'll be denied, or right-wing Knesset members supporting him may boycott the vote to make it appear illegitimate.

The meeting is more about protecting Netanyahu from prosecution than engaging in a "serious, in-depth discussion of" Trump's no-peace/peace plan.

Lieberman accused Netanyahu of "running away from his obligations," focusing mainly on an attempt to avoid prosecution.

Labor-Meretz-Gesher alliance head Amir Peretz said "(t)here's no sense in (releasing) a peace plan a month before elections. Netanyahu and Gantz have no legitimacy to carry out a diplomatic plan at the moment."

Israeli media called it the "most (one-sided) pro-Israel plan ever presented" by the US — overwhelmingly rejected by  Palestinians, PA spokesman Nabil Abu Rudeineh saying on Sunday:

"The leadership will hold a series of meetings on all levels, including the factions and organizations, to announce its total rejection of conceding al-Quds (Jerusalem)" and other unacceptable provisions, calling for Arab world support against the Trump and Netanyahu regimes.

On Sunday, Hamas political leader Ismail Haniyeh said "(w)e firmly declare that the 'deal of the century' will not pass," adding:

"The new plot aimed against Palestine is bound to fail…(a) new phase in their struggle" against Israeli occupation to follow.

Palestinian factions called for a "day of rage" against the Trump regime's no-peace/peace plan.

The Palestinian Foreign Ministry called the scheme the "plot of the century."

Gantz avoided the Trump/Netanyahu trap by agreeing to meet with the US president separately, denying Netanyahu the photo-op he sought, showing him as Israel's leader, Gantz portrayed as a lesser figure, wanting Trump's support used as a platform for seeking immunity from prosecution.

It "wasn't motivated by a desire for conciliation between the two peoples and concern for their future and welfare."

"Rather, (Trump) was concerned for Netanyahu's welfare and political and legal future," adding:

There's nothing about his no-peace/peace plan warranting praise.

"(A)ccording to Israeli sources, it will guarantee Israeli sovereignty over all the settlements and the annexation of the Jordan Valley."

"These sources say a Palestinian rejection of the plan would set the ball rolling for measures of unilateral annexation."

"The Palestinians, who were not briefed on the imminent publication of the political part of the so-called peace plan, reject the proposal entirely."

"It's obvious to the Palestinians and anyone with a brain that this is an agreement between the (extremist) settler right and the Americans behind the back of the Palestinian partner."

"It must be reiterated: A plan that does not promise hope and a future to the Palestinians and whose sole purpose is to give the status quo a US seal of approval cannot end the conflict. It can only deepen it."

The Trump regime failed to consider Palestinian rights and interests, excluding their officials from the decision-making process.

His no-peace/peace plan accedes solely to Israeli demands at the expense of millions of long-suffering Palestinians.