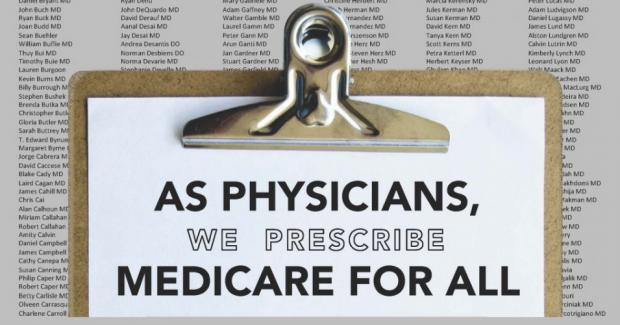 Major US Physicians Group Endorses Medicare for All

Most Americans, doctors, and the nation's second largest organization of medical providers (the American College of Physicians) support universal coverage — everyone in, no one left out.

The US, the world's wealthiest nation, is the only developed country without some form of healthcare for all — a fundamental human right, increasingly unaffordable in the US for low-income households because of its high cost.

It's around double the annual per capita amount in other developed countries, the leading US cause of personal bankruptcies.

Healthcare in America is too expensive for low-income individuals to get seriously ill or have injuries requiring expensive treatment.

Nations shaming the US with universal coverage include European ones, Cuba, Japan, Australia, New Zealand, Venezuela, even Israel, and many others.

In the US under Obamacare, millions of Americans are uninsured, most others way underinsured with little or no protection from major illnesses or injuries.

The solution not taken is obvious — government provided universal coverage, eliminating insurers, saving around $600 billion annually, according to Physicians for a National Health Program (PNHP), its mission statement saying:

PNHP advocates for universal "access to high-quality health care (as) a right of all people and should be provided equitably as a public service rather than bought and sold as a commodity."

It calls for progressive taxation to fund it. The same goes for other vital social services.

The primary purpose of healthcare is to provide it for people in need, not based on the ability to pay.

The 159,000-member American College of Physicians (ACP) agrees. "What would a better health care system for all Americans look like," it asked, along with four other questions?

"Why do so many Americans lack coverage for the care they need?

"Why is US health care so expensive and therefore unaffordable for many?

"What barriers to health care, in addition to coverage and cost, do patients face?

"How do delivery and physician payment systems affect costs, access, quality, and equity?"

The US healthcare system "costs too much, leaves too many behind, and delivers too little" — a broken system requiring "systematic reform."

Administration accounts for 25% of hospital costs. "Complex medical billing, documentation, and performance reporting requirements for value-based payment initiatives have made the US health care system one of the most administratively burdensome in the world."

It takes vital time away from patient care, why eliminating insurer middlemen is essential.

No one sick or injured ever contacted an insurer for treatment.

Despite spending double or more per capita over other developed countries, the US ranks "last or near-last in access, administrative efficiency, equity, and health care outcomes."

1. A system affording all Americans coverage at an affordable cost.

2. Addressing social factors contributing to poor or inequitable health, assuring no discrimination against anyone based on race, religion, ethnicity, gender, or anything else.

3. Cost and delivery systems prioritizing the welfare of patients.

4. Redirecting spending for unneeded administrative costs and bureaucracy to delivering healthcare for the sick and injured.

5. A "system where clinicians and hospitals deliver high-value and evidence-based care within available resource" — more funding available by eliminating insurers.

7. A "system where financial incentives are aligned to achieve better patient outcomes, lower costs, and reduce inequities in health care."

8. A "system where patients and physicians are freed of inefficient administrative and billing tasks" so focus is entirely on providing vital treatment.

9. A "system where value-based payment programs incentivize collaboration among clinical care team–based members and use only appropriately attributed, evidence-based, and patient-centered measures."

10. A "system where health information technologies enhance the patient–physician relationship, facilitate communication across the care continuum, and support improvements in patient care."

In summary, ACP calls for universal coverage, assuring access to medical providers as needed, no one excluded, a system not dependent on income, employment, residence or health status.

It can be paid for if insurer middlemen are excluded, $600 billion to them going for healthcare, along with further enormous savings from government bought medicines and equipment at a much lower cost.

According to a 2017 Commonwealth Fund study, income in the main determinant of healthcare received in the US compared to other developed countries.

Based on this criterion, the US ranks last worldwide among developed countries.

According to Commonwealth Fund president David Blumenthal MD, the US healthcare system is "not not working as well as it could for Americans, and it works especially poorly for those with middle or lower incomes," adding:

"The health care policies currently being contemplated in Congress would certainly exacerbate these challenges as millions would lose access to health insurance and affordable health care."

Compared to 10 other developed countries, the US ranked last in healthcare outcome, equity, and access to care, next to last in administrative efficiency, and 5th in care process.

On Tuesday, 2,000 physicians published a full page open letter in the NYT, calling for universal coverage — "MEDICARE FOR ALL"

Anything less than universal healthcare for all US citizens and residents is unacceptable in the world's richest country.

Medicare for all would eliminate insurer middlemen, underwriting, billing, sales and marketing departments, as well as huge profits and exorbitant executive pay – along with the bureaucratic nightmare under today's system for physicians and hospitals, needing administrative staffs for costly paperwork, unrelated to caring for patients.

Healthcare should be based entirely on a doctor/patient relationship, unrelated to maximizing profits by minimizing costs — entirely related to restoring health to the sick and injured.

That's what healthcare should be all about. That's what everyone in the world's richest country deserves.

Hundreds of organs get 'lost in transit' in US every year, delaying life-saving transplants.