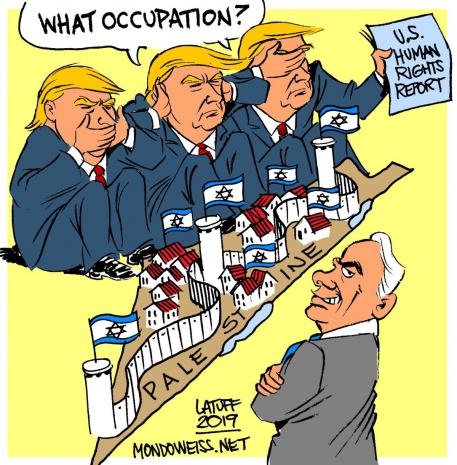 Trump Regime's Deal of the Century Unrelated to Equity and Peace

US/Israeli policy is hardwired against regional peace and stability.

From what's known about Trump's deal of the century ahead of its reported Tuesday unveiling at the White House, it fulfills an Israeli wish list at the expense of fundamental Palestinian rights and peace.

Israeli media reported that the scheme includes Israeli annexation of (illegal) settlements and the Jordan Valley, a map to reveal details visually.

Palestinian self-determination, independence, autonomy, and/or other terminology used will be long on illusion, way short of reality.

When the Oslo Accords and Declaration of Principles were unveiled on September 13, 1993 at the White House, Israeli Prime Minister Yitzhak Rabin and Palestinian leader Yasser Arafat were together with Bill Clinton for the dubious signing ceremony.

Edward Said minced no words denouncing what he called "the fashion-show vulgarities of the White House ceremony, the degrading spectacle of Yasser Arafat thanking everyone for the suspension of most of his people's rights, and the fatuous solemnity of Bill Clinton's performance, like a 20th century Roman emperor shepherding two vassal kings through rituals of reconciliation and obeisance, (and) the truly astonishing proportions of the Palestinian capitulation."

Oslo was unilateral surrender, a Palestinian Versailles, affirming a vaguely defined negotiating process to come with no fixed timeline or outcome.

Over a generation later, they're still waiting for self-determination free from occupation, and the right of diaspora Palestinians to return to their homeland as affirmed under international law.

There's been no resolution on illegal settlements, borders, water and other resource rights, East Jerusalem as Palestinian capital, and an end to longstanding conflict.

According to former Palestinian negotiator Ghaith al-Omari, Palestinians intend to show Trump's deal is "a US/Israeli position" excluding their rights under international law.

They aim to prevent the world community from endorsing it, rendering it illegitimate and dead.

It remains to be seen how the Arab world responds. Jordan's King Abdullah II opposes the scheme, on Sunday stressing:

"Our position is very well known…This is clear to everyone…We are opposed to it."

Israeli Channel 13 reported that the Trump regime invited Arab envoys in Washington to take part in Tuesday's ceremony, getting no response, adding:

The only regional response is from outraged Palestinians, on Sunday PA spokesman Nabil Abu Rudeineh, saying:

"The leadership will hold a series of meetings on all levels — including the factions and organizations — to announce its total rejection of conceding Al Quds (Jerusalem)" and other unacceptable parts of the Trump regime's scheme of the century.

PA prime minister Riyad al-Malki said Palestinians are discussing "practical steps with the Arab brothers" on how to respond to the Trump regime's scheme.

A Palestinian foreign ministry statement said "Trump's plan is the plot of the century to liquidate the Palestinian cause."

On Monday, Trump met separately with Netanyahu and his main political opponent at the White House, Israeli media saying it gave Benny Gantz an opportunity to look prime ministerial.

He praised the no-peace/peace plan, while indicating it's going nowhere until after Israeli elections and at least part of the Arab world is on board.

At the same time, he slammed Netanyahu, saying: "A prime minister under indictment cannot run a peace negotiation. "Netanyahu cannot lead a country and a trial."

Trump's no-peace/deal of the century peace plan was dead before arrival.

His regime is more one-sided for Israel than anything his predecessors proposed.

He cut off vitally needed humanitarian aid for Palestinian refugees, suspended other US aid to the PA other than for security to serve as Israel's enforcer, and closed the PLO mission in Washington.

His so-called $50 billion investment fund for Palestinians and neighboring Arab states that's part of his no-peace/peace plan is all about enriching Western and Israeli monied interests, unrelated to aiding long-suffering Palestinians.

He, hardliners surrounding him, and most congressional members are indifferent to the rights and welfare of ordinary people at home and abroad — including the most disadvantaged and long-suffering Palestinians.

Trump's deal of the century is all about supporting Israeli control of historic Palestine, its people consigned to isolated cantons on worthless scrubland — statehood in name only without rights, resources or security.