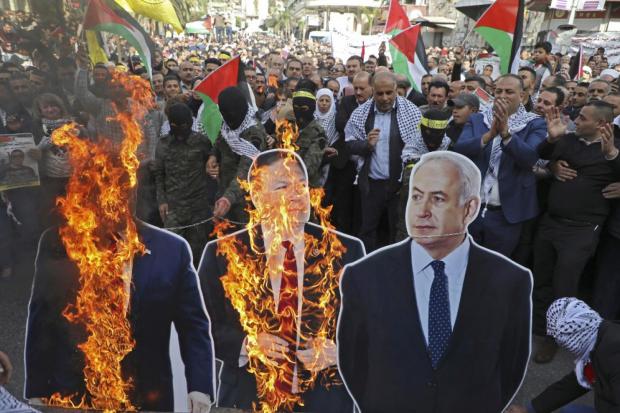 Media React to Trump's Scheme of the Century

Surrounded and influenced by Ziofascists, militarists, and warmongers, Trump's annexation scheme is something only they and their Israeli counterparts could love — wanting it forced on long-suffering Palestinians, dismissive of their rights, welfare, and the rule of law.

The pro-Israel NYT downplayed the scheme's one-sidedness, saying it'll "give Israel most of what it has sought over decades of conflict while offering the Palestinians the possibility of a state with limited sovereignty" — in name only in isolated cantons it failed to explain, adding:

Trump "promised to provide $50 billion in international investment to build the new Palestinian entity and open an embassy in its new state."

Fact: His so-called "peace to prosperity" scheme is all about benefitting US, other Western, and Israeli corporate interests, forcing continued neoliberal harshness on Palestinians, keeping them impoverished and controlled as US/Israeli vassals.

On Sunday, Israel's Knesset and Netanyahu's cabinet will rubber-stamp annexation of illegal settlements, agreed to by the Trump regime.

He turned truth on its head, claiming he "ha(d) to do a lot for the Palestinians, or it just wouldn't be fair (sic)."

Fact: His scheme fulfills an Israeli wish list, doing nothing for them, long-suffering people he scorns.

Cutting off economic aid and funding for millions of Palestinian refugees earlier proved his disdain — his scheme of the century, adding an exclamation point by demanding unconditional Palestinian surrender!

It also distracts from Trump's impeachment trial and Netanyahu's indictment on corruption charges.

WaPo slammed Trump's scheme, saying he and Netanyahu "made Mideast peace an even more distant prospect" by handing Israel a "one-sided gift."

Wall Street Journal editors defied reality, falsely claiming Trump's scheme "is a high-profile endorsement of the two-state solution" — in name only, it failed to explain.

A rump disconnected state on worthless scrubland, its people denied their fundamental rights, is no state at all.

The Journal slammed Palestinians for "reject(ing) peace deal after peace deal (sic)" — ignoring their one-sidedness favoring Israel at their expense for nearly half a century.

Along with the US war OF terror, not on it, the so-called Israeli/Palestinian peace process since the 1970s has been and remains the greatest hoax in modern times — what establishment media never explain, one-sidedly favoring Israel since the Nakba.

Other media headlines were as follows:

Israel "will not recognize a Palestinian state" in any form.

CNN: "Trump unveils Middle East plan that caters to Israel and was swiftly rejected by Palestinians"

Former PA prisoners affairs minister Ashraf al-Ajrami was quoted, saying the scheme "has all the components for it to fail."

Sputnik's website posted video footage of Palestinians in the West Bank, protesting against the scheme.

Iranian Foreign Minister Zarif was quoted, saying Trump's scheme "is a nightmare for the region and the world."

Deal or no deal, Israel controls the Occupied Territories with an iron fist, supported by the US, West, the UN, and most world community nations.

Palestinians have only one recourse — sustained resistance against a brutal occupier until restoration of their rights is achieved, a longterm struggle with miles to go.

'Jerusalem will not be divided': Palestinians protest against Trump's Israel-Palestine p