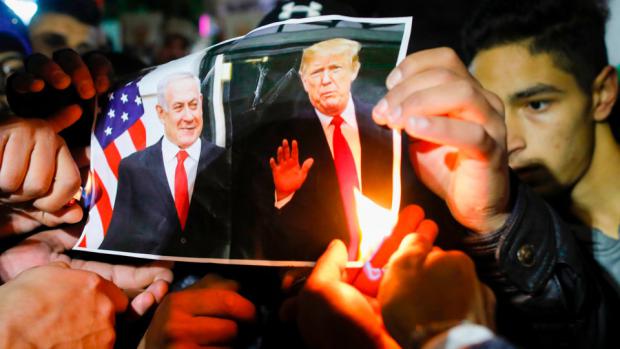 Palestinians to Trump: Their Souls and Homeland Not for Sale

On Tuesday, Hamas, Islamic Jihad, and PA officials met in Ramallah — a rare show of unity, opposing the Trump/Netanyahu conspiracy against Palestinian rights and welfare.

Though likely to be short-lived, it's welcome while it lasts. Collective Palestinian defiance against Trump's scheme of the century is the only acceptable option.

Installed by Israel to enforce its interests in the Territories, serving illegitimately, Palestinian president Abbas can never be trusted.

He has no choice but to reject Trump's scheme. Accepting it publicly could mean his demise, perhaps assassination by enraged Palestinians.

At the same time, defying Israel would find him eliminated and replaced by a compliant successor.

Following the scheme's unveiling, his scripted remarks for a Palestinian audience were as follows, saying:

"Trump and Netanyahu declared the slap of the century, not the deal. And we will respond with slaps. We say a thousand times over: No, no, no."

"The deal was made according to policy set by Israel. No Palestinian child, Muslim or Christian, will accept such a thing."

Threatening to cut security relations with Israel was hollow, similar earlier threats never followed through on.

Without further elaboration, Abbas said the PA will redefine its relationship with Israel — a master/servant arrangement since Oslo, unchanged for over a generation, to remain unchanged as long as he heads the PA.

In response to the scheme's demand for Hamas to disarm, its spokesman Hazem Qasem called the notion "delusional."

The Trump and Netanyahu regimes are mortal enemies of the Palestinian people, wanting their communities isolated, weakened, and controlled by Israel, subjugated to its will, their rights and welfare denied.

Following its unveiling, Palestinians protested throughout the Territories, vowing to resist it.

Demonstrators burned photos of Trump and Netanyahu. Rejecting the plan, Palestinian called it an attempt to "finish off" their liberating struggle.

"January 28, 2020, will mark the official legal stamp of approval of the United States for Israel to implement a full-fledged apartheid system."

On Tuesday, Israeli security forces clashed with Palestinian demonstrators in the West Bank, further protests expected Wednesday and ahead.

Palestinian officials plan meeting with their counterparts in the region, seeking support for their cause — so far coming from Jordan, Lebanon and Iran, not from Gulf states and Egypt, siding with the Israeli oppressor.

"The occupied Palestinian Authority is dealing with an aggressive (US regime), a right-wing, pro-settler Israeli (regime), and a divided Arab world. So the tools at our disposal are limited."

"We'll wait at least until the Israeli election to see where the wind blows."

PA prime minister Mohammad Shtayyeh called Trump's scheme "a plan to protect (him) from impeachment and protect Netanyahu from prison. It is not a Middle East peace plan."

"We reject it and we demand the international community not be a partner."

Western and most Arab nations, along with UN secretary general Guterres, side with the US and Israel, dismissive of Palestinian rights.

Palestinian activist Talal Abu Zarifa said "(w)e will not allow this deal to pass, and we will resist it in every way in order not to open the way for it, as we consider it as a way to put an end to our national rights."

Trump's scheme disqualified him and his regime as a broker for "embracing the Zionist ideology" at the expense of fundamental Palestinian rights, adding:

Key for Palestinians is "the right to return to their homeland," denied them by the Trump/Netanyahu scheme.

It's "little more than a US official recognition of that status quo whose features are very much similar, if not identical, to those that characterized the white racist minority regime in Apartheid South Africa."

Trump's scheme exceeds the worst of earlier ones by his predecessors.

PA complicity with Israel and the US "sold out the Palestinians" long ago, Tamimi saying:

Abbas won't dare sever security relations with Israel. He's been a collaborator with their officials since before Oslo, afforded special privileges for betraying his people.

Palestinian resistance on their own is their only way forward, aided by BDS activism, Jews for justice, and others opposed to Ziofascist tyranny.