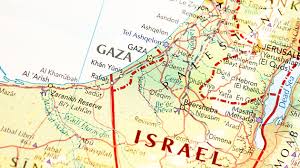 It's a process of slow-motion genocide of the Palestinian people by dispossessing them from their land and denying their fundamental rights, the world community doing nothing to contest what's gone for time immemorial.

German Foreign Minister Heiko Mass issued a statement, saying: "Only a negotiated two-state solution, acceptable to both sides, can lead to a lasting peace between Israelis and Palestinians" — not a hint of condemnation in his remark.

The Saudis expressed "appreciat(ion)" for Trump's efforts — clear support in less than so many words.

One-sidedly supporting US interests, dismissive of Palestinian rights, Egypt urged "a careful and thorough examination of the US vision (sic)."

When did sellout become "vision?"

Gulf states side with US imperial policies, Qatar admitting that regional peace is unattainable without concessions to Palestinians — not forthcoming from Trump's scheme, at the same time saying:

Envoys to the US from the Bahrain, Oman and the UAE attended Trump's scheme of the century unveiling, expressing support by their presence.

Instead of denouncing Trump's annexation scheme of the century, he issued a weak-kneed/pre-scripted statement through his spokesman, saying:

"The United Nations remains committed to supporting Palestinians and Israelis to resolve the conflict on the basis of United Nations resolutions, international law and bilateral agreements and realizing the vision of two states - Israel and Palestine - living side by side in peace and security within recognized borders, on the basis of the pre-1967 lines."

According to Tass, "Moscow has so far made rather cautious statements on the issue and offered to host direct talks between Israel and Palestine," adding:

"Sergey Lavrov noted that the Middle East Quartet, which includes the EU, the UN, the US and Russia, had failed to act."

On Wednesday, Putin hosted Netanyahu in Moscow. Both leaders discussed Trump's no-peace/peace plan, the visit all about seeking Moscow's endorsement.

On Tuesday, Lavrov expressed skepticism of the scheme, accusing the Trump regime of "radical solutions," adding:

"We need to understand the reaction of the Arab friends of Palestine, the Arab League, given that it is the Arab peace initiative that has been approved by the world community as an integral part of the solution to the problem of two states – Israel and Palestine."

His remarks suggested Kremlin endorsement wouldn't be forthcoming, other than support for Israeli AND Palestinian rights, the latter clearly absent in Trump's annexation scheme — continued occupation by another name.

Long before Oslo, Israel rejected the notion of Palestinian statehood, Netanyahu once calling the peace process "a waste of time."

According to Middle East Eye editor David Hearst, Trump's map released Tuesday resembles "an MRI scan of the brain of an Alzheimer's victim."

"The Palestinian state has been entirely eaten away," adding the message of the map is clear. The only Palestinian option is "unit(y) against an existential threat," seeking their elimination.

They have nowhere to go. "(S)tay and fight (against) Israel's supremacist plans for ethnic cleansing" — their only chance to survive as a people.

The alternative is "wither(ing) away as a footnote in history" — like Native Americans, Hearst might have added.